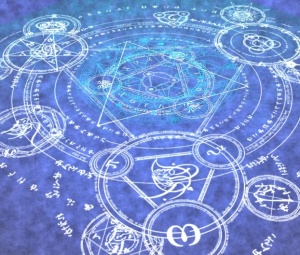 A Summoned Monster is an ally creature created, or summoned, or coerced, into existence when a Summon Monster spell (and all related summoning abilities) are used. A Summoned Monster can have nearly any appearance, as the summoning creature (player) is allowed to define what their preferred ally looks like, how it acts, and how it comports itself.

Some summoned monsters may look like swarms of insects, forest creatures, or even trees and bushes. Others look like noble stags, moose, or other sylvan creatures. Yet others look like fanciful silver-frosted great wolves, or ghostly tigers, red-eyed bulls, or terrifying eagles of ice. Summoned monsters can look like mundane monsters, such as standard-seeming orcs, obedient goblins, or helpful ogres. Yet others look like glowing outlines of celestial beings, inky blots of smoky darkness, gold-plated statues, animated chairs, masses of tentacles, rolling wheels full of eyes, scarecrows, or any of a thousand other forms.

In general, the player and the referee should decide together on the summoned creature's appearance. If the player wants to have a 'signature' creature that they always summon, that is perfectly allowed, or they can allow the GM to assign the appearance of the summoned monster every time it shows up. In all cases, no matter the appearance, a summoned monster ALWAYS has ONLY the powers and abilities ascribed to it by the write-up below. Summoning a Roc does not mean the creature is vast and able to fly, unless the summoner has some way of giving the creature those characteristics. Mechanically, every summoned monster has access to the same attacks and abilities. Without using feats or other modifiers, all summoned monsters of a given CR, no matter their appearance, have the same combat efficacy.

Summoned Monsters always act as faithful allies of their Summoner, and if not actively directed, will always work for the best interests of their Summoner, based upon their (possibly limited) information about what their Summoner needs. They will typically move into combat fearlessly, provoking attacks of opportunity and working to set up flanks, or block attackers from moving freely. As a free action, their summoner may direct them in what they should do.

If they cannot reach melee in a single move, they will usually charge the nearest foe, or convert their standard action to a move action to move in (if they cannot perform a charge) to interpose themselves between their summoner and danger.

Summoned Monsters typically do not exist outside of combat, but if abilities are used to make them do so, they are friendly, helpful, but essentially mute. Even if they do possess useful knowledge or information, they typically cannot speak so they are unable to impart it. They only exist to aid their summoner in battle.

This creature does not award any experience points (XP) or treasure when defeated.
Retrieved from "https://www.epicpath.org/index.php?title=Summoned_Monster_CR_14&oldid=130289"
Category: