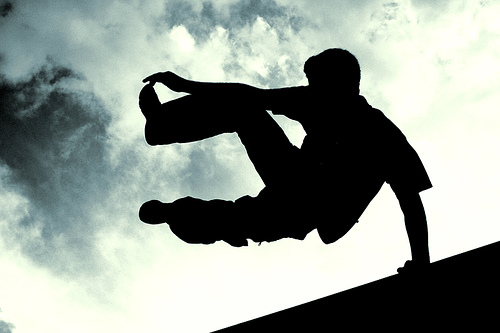 You can keep your balance while traversing narrow or treacherous surfaces. You can also dive, flip, jump, and roll, avoiding attacks and confusing your opponents. At very high levels of skill, you can attempt such incredible feats as walking on a spiderweb, or fighting in the top of a windblown bamboo grove.

Acrobatics checks are sometimes affected by circumstance bonuses or penalties, depending on the terrain, weather, or other circumstances. Examples include:

This skill is often subject to Environmental Effects.

As with all skills, the uses below are merely suggestions, and by no means the full gamut of possible ways a skill can be used. Players and GM's are encouraged to find additional ways to use each skill.