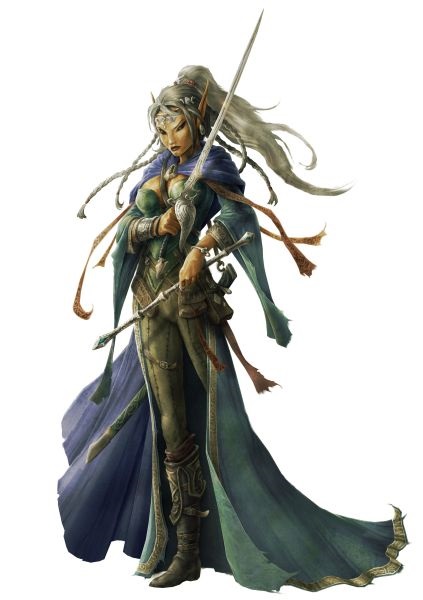 Our honor must outlive us.

While this is a romantic notion, and there is some evidence that Elves are not tightly related to other races of the Prime Material, there is a persistent counter-current of opinion that the Elves were probably tossed out of their fabled homelands for being ridiculous snooty pests.

Regardless of their true origins, or the nobility of their ancestors, Elves have been residents of the Prime Material Plane for a very, very long time. Elves claim to be the First Race, which comes as no surprise to their detractors, and there is direct evidence of Elven civilizations going back far, far into antiquity.

Elves are treated in all ways as natives of the Prime Material Plane, no matter their long-ago origins.

Elves don't have one culture, they have a lot of cultures. They claim that their erudition is too great to be contained by merely one method of living together. Their detractors claim that it's a miracle any two elves ever agree on anything at all, much less are able to get along well enough to form a culture.

Regardless of why, it is a fact that Elven culture is very fractured. Some elves live in forests and make houses out of trees and wear hides and ride beasts. Other elves live beneath the ground and hunt and prey upon others. Some elves build great fanciful cities that are beautiful and airy and sparsely populated. Yet other elves live in river boats, or inhabit tropical jungles, or live in distant eternally frozen glaciers carved in a billion shades of blue.

Perhaps because of this cultural fragmentation, or perhaps due to their Fey origins, elves come in a wild variety of colors and hues. Their skin can be any human skintone, golden tan, silvery-ivory, green, blue, purple, and even rarely pinkish red. Some elves are the deepest, purest black you'd ever wish to see. Similarly, their hair grows in a thousand colors, the only unifying scheme being the brightness of the color. Hair of pink, magenta, teal, silver, gold, turquoise, and nearly any other hue is quite possible. Eyes, as well, are of a myriad of colors and shades and hues, ranging from pearly white to silver to yellow to blue to green to red to brown to black and every other variant. Given this riotous coloration it would be easy for elves to seem gaudy, and yet, remarkably, they do not, Every elf's unique color palette is always perfectly weighted and balanced so they look like the paragons of good taste. It can be quite annoying, among the many other annoying traits of elves.

Regardless of the particulars, all Elven cultures share a few common traits. Elves tend to be extremely civilized, with many customs and rituals binding their behavior. Elves tend to have very small families (for reasons explained below) and are not very close to their families. Elves tend to be more than a bit detached, and are rarely if ever in a hurry to do anything. An elf may start a project (fixing a door) and not finish it for five years.

Elves tend to favor quality over quantity. An Elven meal might consist of three perfect flower petals basted in dire wasp honey that was made only from the nectar of a different flower and takes a century to age to crystalline perfection. Such a meal might be the highlight of an Elf's entire year, while most other races would barely taste the minuscule delicacy, much less gain sustenance from it.

Elves are fairly unique in that it seems as if the race has only a fixed number of individuals which can be alive at any given time. Why this is so is intertwined somehow with their deep origins, and it isn't even certain whether this is a true limitation or a weird cultural thing.

What this means is that if times are prosperous for Elvenkind, parents who want a child have to wait until another Elf dies. This can take a long time, and by a long time, we mean a long time even by Elven standards. As a result, when times are flush, Elven parents are often seen petitioning older Elves to 'make a spot.'

When times are hard for Elves, births are much easier to arrange, which is why even though Elves are not plentiful, there's always about the same number of them around.

Elven children are rare in even the worst of times, and their childhood varies between almost ridiculous levels of doting (from parents who might have had to wait centuries for their little bundle of joy) to simply being ignored most of the time (from parents who are simply performing a duty of child-rearing). Elves reach physical maturity in about fifty years, and achieve adult levels of mental maturity around fifty years after that. This means that elves have a long period, between the ages of fifty and a hundred and ten or more, when they are basically rebellious teenagers. Many of the bad impressions of Elven culture come from other races having to deal with these mentally immature but fully adult looking elves, known collectively as Wanderlings or Wildings or Ridiculous Snooty Pests, depending upon whom you ask.

Elves live a really, really long time. This means they have a very, very long time to accumulate 'goodies.' Elven families tend to be well off at a minimum, and can be ridiculously rich by the standards of other races, which is where the Elven tendency to build huge, airy, and almost empty cities comes from. That said, Elves that are going adventuring are usually starting their career right after they finally mature from their Wanderling stage, and are usually as poor as church mice because of their last few decades of foolishness.

Elves are good at crafts, very artistic, and have a lot of money on average. They also tend to get robbed a lot, and an Elf is likely to simply pay off a robber to be rid of them. Elves often are deeply invested in local cities of other races, and will take leases, land rents, water rights, etc, to maintain a good income regardless of their other fortunes.

Elven customs are as varied and fractured as their culture. Some elven clans may practice ritual intermarriage of cousins, while others find great sport in breeding generations of fey-kin for their amusement. Some elven cultures increase their birth rate with elaborate assassination games that play out over decades, while others spend much of their time turning giant oaks into titanic versions of bonsai trees, or building massive palaces on the side of a cliff.

In general, Elven customs tend to be aimed at the long view. No elf has ever been in a rush for anything, and they value the rarest, highest quality things over more common amusements.

No one knows how long Elves can live. The standard answer of 'they're immortal' is meaningless, because an Elf would need to live forever to prove it.

In practice, Elves usually live five or six-hundred years on average. Most Elves die from misadventure or simple ennui. There are recorded instances of rare Elves that could prove they were thousands of years old, and such Elves looked exactly the same as all the other Elves, except for a certain ageless wisdom in their eyes.

Burial practices among elves are, as you would expect, wildly varied. Some Elves are buried in river biers and allowed to float away, others are interred in stone crypts far below the earth, still others have trees planted on their graves as markers. The only common thread is that burials among Elves are a Big Deal. All Elves want to leave behind something that's going to last a while, because it might be a couple of hundred years before their kids bother to come visit the grave site.

Elves have a strained relation with most other races. Many elves consciously or unconsciously treat other races the way humans do dogs -- you like them and value them, but don't get too attached because they're going to die in a few years and then you'll just feel bad.

To make matters worse, some of the most visible Elves to other cultures are young Elves in their Wanderling phase, when they are physically adult but have the mindset of a spoiled thirteen year old. Lots of people have a very bad impression of Elves.

That said, once elves have forged a bond with another entity, they will be the most steadfast of friends, utterly reliable and generous to a fault. Elf clans have bought favored cities entire Navies as gifts, or supplied entire nations with food enough to turn a famine from a disaster to an inconvenience.

Elves have no alignment or class restrictions.

All Elves have the following Standard Racial Advantages: