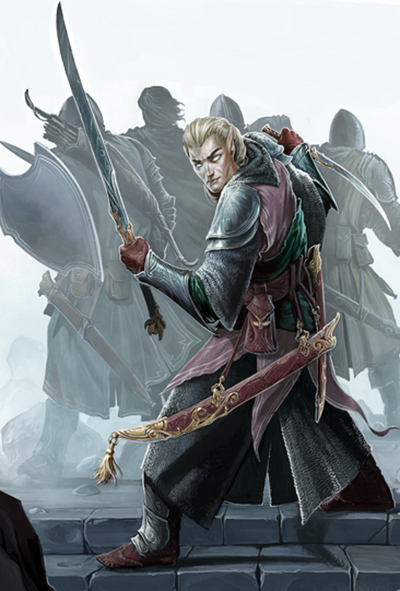 The blessings of each, the acceptance of none.

All discussions of fey-kin origins are indelicate. The reason is simple: All fey-kin are fusions between the Fey origins of the Elves and the very mundane origins of the Humans. Elves tend to view Fey-Kin as a bit embarrassing, tangible proof that somewhere, somehow, an Elf succumbed to a bad case of 'jungle fever.' Humans would be more accepting, except that typically of Humans, they resent the fact that Fey-Kin live longer than they do, which naturally drives humans into fits because the fey-kin is getting one over on them.

In simple fact, most fey-kin are NOT the offspring of a bad case of 'jungle fever', or even more unsavory things. Fey-kin are a stable race in their own right, the Fey and the Mundane settling into an uneasy but permanent alliance. In many ways, fey-kin get the strengths of both their parent races, but they are emphatically their own race as well. Since Elves tend to treat them like embarrassing pets, like that dog that just won't stop humping legs, and humans have to work hard not to let their envy coalesce into spontaneous lynch-mobs, fey-kin often form their own enclaves within larger cultures and socialize and marry among themselves.

In appearance, fey-kin are a comfortable blend of their two origin races. They have elfin beauty in full measure, their forms and faces every bit as attractive as any Elf, but their coloration is strictly the solid, muted spectrum of Humanity, with rich earth-tone and summer notes being their full palette. That said, fey-kin tend toward the more 'spectacular' extremes of human coloration, with red and blonde hair quite common, dark skin paired with vivid gold hair, and even those fey-kin with simple dark hair being noted with vivid pale skin or brilliant blue or green eyes. While fey-kin will never have the pastel skin or hair of their Elfin ancestors, neither will they ever be mistaken for humdrum humanity.

Fey-kin have little culture to call their own, and it is perhaps their greatest weakness. Over time, it is probable that fey-kin will develop something uniquely their own, but it is certainly not the case now. In practical terms, most fey-kin live in modest enclaves embedded within human cultures. There are a lot more humans than elves, and while humans are green-eyed with jealousy every time a beautiful fey-kin woman admits she's over a hundred years old and still looks twenty, that's still better than being treated like a pet or a game piece by the Elves. That said, fey-kin have a huge advantage over Elves, in that there is no peculiar racial limit to the number of fey-kin that can be born at any given time. It is strictly NOT spoken of, but Elves who wish children in good times, and who can persuade no other Elf to 'make a spot', can resort to fey-kin. This is an uncomfortable topic at best, for everyone involved.

Fey-kin tend to be just as driven as Humans are, with the advantage that they live a long, long time. When you can reliably count on three hundred years for your investments to mature, you take a long view of things. Sadly, from a fey-kin's perspective, human cultures and nations are mutable, changing things. It is hard for a fey-kin to declare fealty to a king when they know that in fifty years or less he'll be gone, and they'll just have to declare fealty to the next guy, assuming the humans don't burn down and abandon the whole city on an apparent mad whim.

From a fey-kin's point of view, elven society is appealing primarily for its stability. It's nice knowing that your bank isn't going to dissolve in a hundred years or so the way human businesses do, and it's nice knowing you can make some friends and expect them to be around for the birth of your first child next century. That said, making friends with an Elf is tough business. For a fey-kin to get an elf to treat him as a sentient being is a true challenge, as many elves tend to view fey-kin as tainted lesser things fit only for entertainment.

Fey-kin fit in poorly with both Humans and Elves. A fey-kin child matures more slowly than a human child does, at least mentally. Humans are basically fully grown in fifteen years and mentally mature by twenty. Fey-kin are physically grown at fifteen, but don't mentally mature until twenty-five or thirty. This means that all through their childhood, fey-kin children being raised with human children are just a bit...slow. Fey-kin in schools always have to be held back several years at a minimum, and it is not uncommon to see a thirteen-year old fey-kin child in a class with human eight year-olds. Human children being as cruel as adult humans (if not more so) makes this a tough time for a fey-kin, and they often reach adulthood with a powerful sense of 'slowness' and inadequacy from all those years of humans racing past them.

On the other hand, if they are raised with Elves (rarer but not unheard of), fey-kin gain a reputation for being boring and prosaic. Elves reach physical maturity at the same rate as fey-kin, so they fit in better, but fey-kin reach adulthood mentally by age thirty, which is when Elves enter their decades-long 'Wildling' stage. Because the fey-kin feel no similar urge to chase adolescent adventure, they quickly gain a reputation for being dull, prosaic creatures with no sense of adventure that can't take a joke. Mentally mature Elves might have some sympathy for the fey-kin, but what vigorous thirty-year-old fey-kin wants to hang out with hundred and fifty year old adult elves? Those guys stay at home and arrange flowers, for cryin' out loud....

By far the best results come when several fey-kin are raised together. In human society, they form their own little bubble of community in school, their human peers racing past on their journey to the grave. In elf society, they form a band of tweens who can roll their eyes together at the immature behavior of the elven wildlings that are their age-peers. Of course, these enclaves of unity simply reinforce the fact that fey-kin belong truly to neither of their parent cultures.

Fey-kin tend to be positive additions to both Human and Elven economies. In Human economies, fey-kin businesses tend to be bastions of stability that the rest of human economic endeavor can use as a stable foundation from which to wildly grow and evolve at a dizzying pace. In Elven economies, the fact that young fey-kin mature quickly and do not go on a century-long wastrel binge is a boon, especially in cases when the Elves have suffered some setback and their birth-rate is higher than normal. Fey-kin are a strongly beneficial influence in all cultures fortunate enough to have them.

Of course, such benefits only make the already-jealous Humans even worse, and no Elf would ever admit they could gain anything from a 'tainted half-breed', so even these benefits come with difficulties.

Fey-kin tend to follow the general customs of the culture they are currently living within. Oddly enough, in both Elven and Human society, fey-kin tend to come off as antiquated. In human societies, fey-kin might like to wear clothing that is brand new but made in styles that fell out of fashion decades ago. Similarly, in Elven culture, fey-kin tend to be sober and serious, especially compared to the Elven Wildlings. As a result, fey-kin have a strong reputation as traditionalists; sober, clean-living conservative sorts who like the way things were and once they have settled on a method that works, they darn well stick to it.

Surprisingly enough, this tendency of fey-kin to stick with what works once they find it endears them, culturally and racially, to Dwarves. Dwarves reflexively dislike fey-kin due to their fey heritage, but it is amazingly common to find fey-kin and Dwarves forming fast friendships and getting along extremely well once the initial frictions and prejudices are overcome. Indeed, it is not uncommon for the Dwarven enclave and the fey-kin enclave to be adjacent in a human city, and the two groups make excellent neighbors.

Fey-kin, unlike elves, have a definite life-span. They can expect to enjoy a childhood, adulthood, middle age and dotage, just like humans do, but they can expect to live a long, long time. Fey-kin tend to die of old age somewhere close to five hundred years of age, but this is after they have suffered through a period of dotage and senescence lasting over a hundred years. For fey-kin at the end of their lives, that extended life-span is no blessing, as suffering from arthritis for over a century is no joke. Indeed, many fey-kin take the 'elven way' rather than letting nature take its course, because for a fey-kin, mother nature is a cruel, cruel Mistress.

For burial customs, most fey-kin want a substantial place to lay their bones, since their children and grandchildren are likely to be visiting for centuries.

Fey-kin have strained relations with both humans and elves, as the gulf between those three species is a large one. Surprisingly, once they get to know each other, fey-kin and dwarves get along famously. Fey-kin tend to be less brooding and dour than the dwarves, but they are easily serious enough to 'get' the Dwarven world-view, and they appreciate it. Plus, Dwarf beer is delicious! Dwarves and fey-kin do not co-habitate well, however. Fey-kin are very much a race of the open world and do not like the dark, cramped warrens of Dwarven Holds, and no self-respecting Dwarf spends any more time in the Void than they have to. There have been a few successful enclaves in which a fey-kin town was built directly above a Dwarven town, with vigorous trade vertically between the two cultures. Such arrangements may become more common in the future.

With most other races, fey-kin are treated as a breed of peculiar humans, to the chagrin of both fey-kin and humans.

Fey-kin have no class or alignment restrictions.

All Fey-kin have the following Standard Racial Advantages: