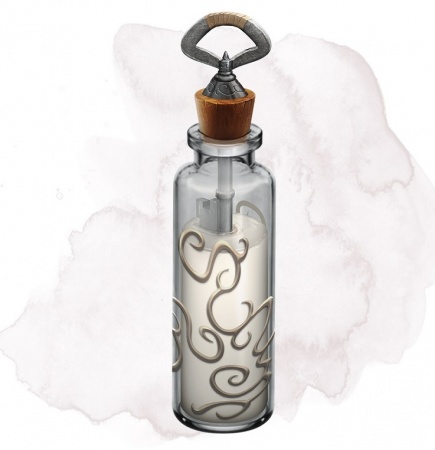 A fugue potion grants the imbiber a full-night's rest in a single minute of time. They cannot be used during combat.

When imbibed, a fugue potion transports the drinker into a parallel pseudo-dimension, a ghostly reflection of their own world, where time appears frozen to a near-complete halt. The drinker remains in this world for eight relative hours, while in their own world only a single minute passes. The fugue-plane contains the same natural or manufactured terrain as the place where the potion was consumed, but any attempt to travel more than 10 feet in any direction leads the drinker back to their starting place. The physical composition of the place has an odd consistency, like a dense, gritty loam, easily picked apart (though, due to the drowning risks, this is strongly discouraged).

The fugue plane is completely uninhabited by any creature aside from the imbiber, with no recourse or aid from outside. If the imbiber has an animal companion or a familiar, they only know that the familiar is alive or dead and otherwise cannot interact with them in any way. If they have followers, they remain in the 'real' world, awaiting the drinker's return.

During the eight hours granted by the fugue potion, the drinker may prepare spells, pray to their deity for new spells, and perform any other elements of their nightly routine, just as though they were getting a full night's rest. If they sleep at least 6 hours during this time (or whatever is appropriate for the race/class of the imbiber), they retain every benefit of a full night's rest. However, while in the fugue-plane, spells and magic items do not work. Any attempt at spell casting, using any supernatural, spell-like, or extraordinary ability fails. Magic items cannot be activated. Any ongoing effects that were affecting the character when they drank the fugue potion continue their effects unabated, with spell durations and time-based checks, such as those from diseases or poisons, accruing based on the relative time of the imbiber (i.e., 8 hours pass). When the fugue potion ends, the drinker returns to their own plane.

To anyone witnessing this potion being consumed, the drinker abruptly disappears, only to reappear in the same spot one minute later. If the space they left becomes occupied or blocked during this minute of absence, the drinker is shunted to the nearest available space (roll randomly if more than one is possible) and takes 10 points of interstice (physical, rare) damage for every 5 feet of forced movement caused by this shunting. Furthermore, the potion's duration cannot be voluntarily shortened or aborted. Once in the fugue-plane, the drinker is committed to the full 8 hours of solitude. While the potion is in effect, the drinker cannot perceive, communicate with, or affect any creatures, from any other plane, in any way.

A fugue potion cannot be used in a pocket space. Those who make such items will speak at great length about the requirement for a 'flat space' for the item to work. You cannot use a Fugue Potion while inside a demi-plane, while inside a Portable Hole, or inside of any spell effect that creates a pocket dimension, such as a Mage's Magnificent Mansion (Sorcerer/Wizard Spell) or Oasis (Sorcerer/Wizard Spell). Attempting to do so inflicts (Order 1 damage): 1d6 points of damage per character level (max 35d6 at character level 35) as interstice (physical, rare) damage and the potion has no other effect.

In the event that two or more people drink fugue potions at the same time, each person is sent to a unique fugue-plane and have no communication with each other, or anyone else, as per the normal effects of the potion. While the potion itself can be dispelled prior to its use, rendering it a useless liquid, a dispel magic cast on the space from which the drinker vanished has no effect.

This is a consumable item — once it is used, it is expended and cannot be used again.

A Centennial Fugue Potion is the least powerful and most dangerous of them all. Once imbibed, this potion may not be safely consumed again until one hundred years and a day have passed.

While this means that Elves love them, most races can't really wait that long to use a potion again.

Note to GMs: In most cases, this potion is a 'use it once in a character's career' sort of item. Be sure to have the player track this on their character sheet.

As a consumable, this item can only be used once. After its effects expire, it provides no further benefit.