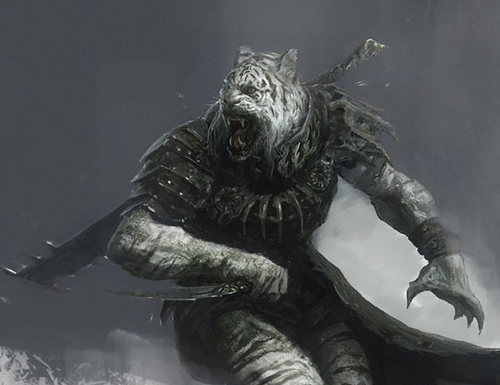 Of all the intelligent races, there are several that are aligned with animal spirits. The story of their origin is vague, but no matter where you go, the same general outline is agreed upon. That outline goes something like this:

In the Dawn Times, there were several civilized intelligent races. Who was the First Race is a matter of debate, but there is no doubt that there were Elves, Dwarves, and Humans very early, followed closely by Gnomes and Halflings. For a very long time, these were the dominant races.

After the Dawn Times but still very long ago, there were many animal Gods who wished to also have a race of intelligent creatures to worship them. As a result, there came to be hundreds of intelligent races, many of them aligned with animal spirits. This was a period of great strife and chaos as all the multitude of races strove among themselves.

Eventually, the Gods decided there would be a great contest, and from the hundreds of intelligent animal races there would be chosen five, to match the number of the First Races. The details of the contest can be found in thousands of myths all over the world, but in the end, exactly five animal races were imbued with the Spark of Civilization.

Those five races exist to this day. The races that lost the contest were understandably bitter, as they were relegated to a lesser role. Some races, like the centaurs, moldered away into decline. Other races embraced their bestial natures with pride, like the gnolls.

One of five races that won the contest is the Gata.

Gata are a rare race even though they bear the Spark, and are somewhat more common in less civilized areas. Unlike many of the animal totem races, Gata do not integrate into larger societies in a graceful fashion, and they prefer to live in their own enclaves and villages, if possible.

Gata are a compact, muscular people, with taut bodies that are extremely athletic and flexible on top of being ferociously powerful. Gata are not bulky, but they are not lithe, either. Their muscles are powerful and well defined, but at the same time their skeletons are loosely joined and flexibly jointed. The result is a range and dynamism of motion that is astonishing even to other powerfully athletic races such as Arborians or Bru-kin.

Gata have very animalistic faces, with pronounced feline features. Unlike other animal totem races, Gata faces are not very expressive, as they lack many of the facial muscles that would let them make many expressions. As a result, Gata have difficulties with social interactions among non-Gata. This is not to say that Gata are stone-faced! A Gata's ears replace many of the functions facial muscles take, and once you are used to a Gata's expressions, they easily make their point with others.

Gata have a social structure which is strongly tied to family. Gata organize themselves into large prides consisting of male-female pairs. There is an Alpha couple who are the nominal leaders of a given pride, but each couple is ranked within the pride according to a complex and fluid system of status and prestige that is close to impenetrable by non-Gata. This is made much more complicated by the fact that the couples in a pride are not static: Couples break up and reform fairly frequently, as all the Gata jockey about for social position.

Children are raised communally and will almost always stay with their father if and when the couple that bore them breaks up. Unlike most cultures that practice marriage, there is no trauma or stigma associated with this, and the biological mother is rarely if ever removed from a child's life.

Single Gata are outside the social structure of Gata life, and have no say in the affairs of the pride. As such, single Gata without children are free to roam as they wish, and adventurers are almost always drawn from this pool of Gata. Once a Gata is drawn into a pride structure and integrated into a couple, they rarely if ever venture away from their pride again.

Gata have children in the usual humanoid fashion, a couple mates and a child arises. Female Gata are powerful physically but a pregnancy certainly impairs her ability to work in society. As a result, the pride acts communally to support female Gata, up to and including the most essential of childbearing activities such as nursing. As a result, Gata children have very little attachment to their birth mother compared to most races.

Gata have a childhood, adulthood, seniority and dotage very much as humans do, and live the same length of time as a human. Gata, due to their communal upbringing, mature physically and mentally a bit more quickly than humans, and as a result will set out adventuring a few years earlier. Gata almost always teach their kits within the pride, only sending a child out for tutoring if there are skills or abilities the child wishes to learn that the pride does not already possess.

Gata are not tightly integrated into the economic activities of their neighbors, but they tend to have a larger impact than you would expect because Gata have one singular talent. Gata are good at animal husbandry. Why this is so is uncertain. You would not expect a race of catfolk to be good at herding, but they certainly are. Gata raise animals the way Dwarves dig: Easily and naturally.

As a result, Gata make a major impact selling animals for food, selling milk and cheese, and selling animals as draft beasts and pets. In general, if there is a domesticated animal, Gata had something to do with it. They are fantastic herders and breeders. Gata often rent the use of lands to raise animals on, and amazingly enough, Gata love pets. Gata love snakes, hamsters, gerbils, chinchillas, and all manner of small adorable lizards and such.

Gata prides tend to be rural. They will rarely if ever be found in close association with other races or in larger settlements. As a result of this, Gata have a bit of a reputation as 'hicks' in the larger world, which the Gata are not exactly socially adroit enough to dispel.

Gata prides rarely have large or elaborate houses. Instead, the Gata will gather in a large, loosely constructed and wide open building that remarkably resembles a barn. They live in a loose pack in this structure, their herds nearby. Gata tend to live close to the seasons, and will celebrate all the solstices as the turning of the seasons.

Gata will present a child with a pet nearly as soon as they are walking, and many Gata have pets their entire lives. Crows, parrots, and exotic birds are favored pets, and many a Gata will have a songbird or two..or three... hanging around, trained exquisitely to perform tricks.

Gata, like many of the animal totem races, have a pelt. How fully this covers the gata varies widely, sometimes leaving the hands and feet bare, sometimes the belly, sometimes the flanks, and sometimes the pelt is only on their head like (short) human hair. Gata skin can be any color of human skin, but tends to dark brown or black, although very pale pink or white is not unheard of. The pelt itself usually comes in some tawny color, tan or dark brown, although both white and black are also seen. Patterns (tiger stripe, leopard spot, calico, appaloosa, and many others) in the fur are common and can be very complex. A gata's skin and pelt can affect their social stats, so gata tend to spend a good amount of time each day in grooming, usually with their mate and any nearby children who need a bit of a touch up. Gata prefer brushes for this work, along with various pomades and unguents, and gata parents are not above resorting to licking, although this is generally kept more private.

Gata frequently have eyes of animalistic appearance, ranging from tiger pattern eyes to goat eyes to shark eyes to crocodile eyes to snapping turtle eyes (very fearsome) to exotic monster eyes. Some gata have normal human pattern eyes, and such are seen as auspicious, since they get along better with the famously prickly humans.

Gata generally have a busy and very full childhood, running and dashing, with many playmates and rivals. Their pride is the center of their lives...until they reach adulthood. In adulthood, Gata become very aware of social status in their pride, and in order to rise, they must be part of a couple.

The social structure of a pride is a fluid and shifting thing, with status depending upon deeds and performance, appearance, cleverness in repartee, and a thousand other things. Those Gata who go adventuring have chosen to step aside from this roiling competiton in a bid to execute a master stroke, to achieve fame and wealth through adventuring, and return to their pride as a fait accompli. Or even, daringly, to join another pride entirely!

Gata in a pride are buried with tremendous reverence, and their graves are tended for as long as the pride persists. A Gata funeral is a time of somber remembrance, with many tellings of tales and exchanging of gifts and momentos which memorialize the deceased.

Gata on adventures who encounter another pride will be expected to visit, and if they do not, a few representative members of the pride will come to visit. This is reminiscent of another Gata custom, which is the concept of gift-spouses. It is not uncommon for Gata prides that have met one another to exchange a few couples, to 'mix things up.'

Gata are not a hugely sociable race with other species, but they tend to be a little more friendly with Barani and Humans. As a matter of fact, Gata might be the only race that actively likes Humans, rather than tolerate them as inevitable. Gata despise Gnomes, since those happy-go-lucky tinkerers have an unfortunate need of leather and ivory and furs for their contraptions, and Gata have so many herds and pets, surely they would not miss a few.... No Gata will give a Gnome the time of day or let them out of sight if they can avoid it. Gata also do not get along at all with Grippli or Vanx, either. As very good herders, Gata are at least tolerated by almost every other race.

Gata have no class or alignment restrictions.

All Gata have the following Standard Racial Advantages: