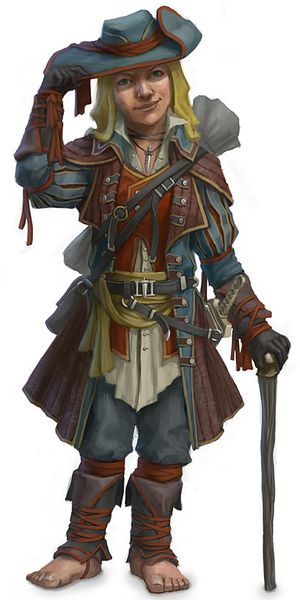 In a hole in the ground, there lived a Hobbit. Not a nasty, dirty, wet hole, filled with the ends of worms and an oozy smell, nor yet a dry, bare, sandy hole with nothing in it to sit down on or to eat: it was a hobbit-hole, and that means comfort.   — J.R.R. Tolkien, The Hobbit

Unlike most races, Halfling communities tend to leave very little impression on the pages of history, almost as if their famous stealth applies to their entire civilization. As a result, no one is certain just exactly where halflings came from. Some of the most pervasive evidence is that halflings are a fairly new race, much younger than the Elves or Dwarves.

Conversely, there is also evidence that, like Humans, halflings have been around a lot longer than would seem reasonable. There are some records that indicate that the Halfling race was created very early on to serve as the caretakers and custodians of the world once all the other races have gone extinct. This notion is fiercely contested among scholars and scribes and sages and wizards. If you can get the most learned people to admit it, the simple truth is, no one knows for certain what is up with Halflings.

One fact that most scholars agree on is that Halflings are strongly Earth oriented. This is reflected in their habit of preferring burrows and semi-subterranean sunken houses, and in their ruddy skin tones. Halflings tend to be earth tone, with a thousand shades of tan in their skin tone and always high in color, blushing easily and deeply. Their hair is usually some shade of sturdy brown, with some rare instances of rich golden-blonde or deep black hair. Their eyes are always dark, the lightest being seen a sort of startling hazel, a color viewed among halflings as a sign of an adventurous spirit...which is almost never a good thing.

The one solid fact is, almost every civilized creature likes having halflings around. Halflings are the very best of good neighbors, and anybody with good sense sees that and strives to keep them around.

Halflings make families and raise children in the normal way, just...more so. Halflings are very focused on their daily lives.

Halfling culture is insular. Halflings find decorating their houses, tending their gardens, working in their yards and fields and kitchens, to be endlessly fascinating and interesting. Halflings are enormously interested in the doings of their family and the doings of their neighbors families. Halflings find their local community to be awesome and interesting and excellent in almost every particular. Halflings love meals and brunches and tea parties and every other social function.

Of course, the opposite is true as well. Halflings have little interest in the world outside their local community, to the point that many of them have mild agoraphobia, and will actively avoid discussions and interactions with 'the outside.'

Adding to this is the halflings intense involvement with family. Halflings have large extended families, with cousins and uncles and grand-nieces in all directions, all tightly woven together with familial bonds and gossip. Very few halflings ever feel a touch of wanderlust, because their local community is so vibrant and busy, it completely absorbs all of their time and energy.

Halflings love holidays and festivals, and not only have their own calendar of such things, they also will observe pretty much every holiday and festival of every culture around them, as well, just to be more neighborly. Halfling festivals tend to be based on the seasons and the cycles of life, with extra holidays for Founding Day, Hale Winter, Springtide, etc.

Halfling families are a source of great comfort and great anxiety. A halflings extended family is nearly always living in the same village, and even third cousins and step-aunts are busily involved in the minute details of their relative's daily lives. A halfling child is therefore subjected to potentially dozens of mother and father figures, all of whom feel perfectly justified in partaking of the child's upbringing and education. This can be very confusing, of course, especially when disagreements over the best means of rearing a child or teaching them about the world occur.

Luckily, halflings are almost pathologically devoted to family and friends, so even the most vigorous of disagreements might never amount to much more than disgruntled diary entries which are never shared with anyone. On rare occasions, a family might split apart over some disagreement, and these separations are often complex affairs. Imagine a simultaneous divorce of 100 couples with children, each with property, land and emotional ties to all the rest. It can take decades for these divisions to fully take place, though even at their bitterest, the conversations are polite and hospitality is abundant. Of course, everyone is quietly seething inside, but appearances are important.

The halfling child reaches physical maturity at around 20 years old, and mental and emotional maturity by around age 30.

Halflings spend a fair bit of their energy accumulating keepsakes, as well as fine furniture and luxury items for their households. As a result, they can be seen as miserly by outsiders, though never to the point of turning away guests from a meal. They simply aren't frivolous spenders, preferring to keep their money close until they find just the right thing they want.

In business, Halflings can be a bit too flighty to keep meticulous books, and sometimes are too naive to avoid con artists and petty thieves. As a result, halflings tend to keep their mercantilism centered in their own communities. While they would never treat a non-Halfling stranger as an outsider or potential threat, they are more comfortable when they know whatever money they are spending or earning is coming from a family member, or a neighbor who might someday have grandchildren who marry into the family. In this way, all money eventually comes back home.

While halflings are nowhere near as covetous of monetary wealth as Dwarves, they can see the good sense in keeping all the gold polished, and closely examining every gem (as Dwarves are wont to do), because ultimately, wealth leads to comfort. And gold coins and gemstones are quite nice, really, even before you spend them.

All Halfling customs are concerned with strengthening the bonds of hearth and home and family. They celebrate many holidays, and if they are close to a host culture, they will celebrate all those holidays too. Halflings love birthdays and anniversaries and commencements and graduations and will have a celebration for unexpected guests or even a rollicking good storm. Halflings are just happy, fun people when they are at home, and there is no denying it.

A less well-known custom among Halflings is Homesteading. As Halfling communities grow, their burrows become more tightly packed until the community reaches a sort of consensus. Once there are enough Halflings, they will begin to Homestead. Halflings will set out, usually well provisioned and in sturdy caravans of wagons, and they will journey to a new glade or valley, often someplace very far away, and there the Homesteaders will settle down and dig new burrows, and often in the space of a single summer, a new Halfling community will be born.

Most halfling communities keep a list of likely homestead spots, and much of a Halflings modest desire for news will revolve around the current status and location of good homestead spots.

Halflings live around 180 to 220 years, and reach their dotage around age 150. Often, however, Halflings will claim to have reached their dotage much earlier, as they declare their retirement and spend the rest of their years sprucing up their homes, taking care of family and reminiscing about the good old days.

Halflings prefer their burials to be done on a pyre, the bodies burned and the ashes left to blow away in the wind. As much as Halflings prize freedom, to them, death is the ultimate liberator, freeing them from the shackles of physical bodies and worldly needs. While every halfling enjoys their morning hour of grooming, and their 6 or 7 meals per day, all of them mildly resent the NEED to do them. In death, they can finally bathe and eat only when their whims drive them to do so.

Halflings are a rare race, but are probably the most abundant of the rare races. However, unlike most other rare races, halflings almost always live in their own small hamlets, thorps and villages, often called shires. Halflings are remarkably talented at living on their own. They greatly enjoy finding lovely spots, tucked away in the world, and making such little hideaways into their own versions of paradise. An idyllic alpine valley surrounded by brutal peaks, is an ideal halfling home. A desert oasis, surrounded by hundreds of miles of burning waste in every direction, is an ideal halfling home. A cozy dry island in the middle of a vast swamp, a well-watered box canyon in a badlands, a remote glade in a wild, rugged forest, a fertile river delta between the sea and a hostile pampas, all such places are likely to have a settlement of halflings.

Halfling settlements are entirely self sufficient. They like neighbors, and will trade with them gladly, but always at a bit of a distance. Halflings do not need neighbors, and if they lack any, well, all to the better in their minds. No halfling is ever going to invite strangers to their house, for example, although if strangers show up, they will be smothered with hospitality. Halflings are also remarkably settled, and their homes are unobtrusive. It is possible to walk right though the middle of a halfling village and never even notice it if you are not paying attention. On top of that, halfling homes, being completely buried and made of sturdy brick and stone and wood to boot, are extremely durable. You can't burn a halfling village, even if you can find it.

That said, halflings are quite well liked by pretty much everybody, except possibly the nagdyr, who get jealous easily, and the grippli, who are similarly self sufficient but live in much less comfy places. Halflings are also in demand by adventurous sorts, as their singular skills and talents make them excellent friends to have in a rough spot.

Halfling characters have no alignment or class restrictions.

All Halflings have the following Standard Racial Advantages: