Difference between revisions of "Handy Haversack" 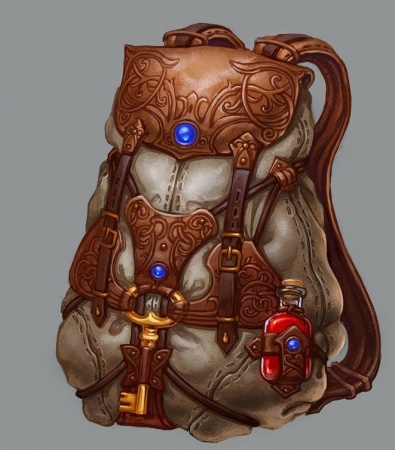 A rumpled, somewhat unimpressive leather satchel, with a flap covering the opening that buckles closed, and two sturdy shoulder straps to allow it to be carried on the back without being held. Despite its appearance, a magic haversack is a marvel of thaumaturgical engineering that contains an extradimensional pocket of space within. Objects placed in the haversack can be much larger than the haversack itself and still comfortably fit inside (as long as the object can fit through the 3' diameter opening of the bag), all without increasing the weight of the pack. Indeed, the pack weighs 5 pounds, regardless of whether it is completely empty, or stuffed full.

While such storage is useful enough, the pack has an even greater power. When the wearer reaches into it for a specific item, that item is always on top. Thus, no digging around and fumbling is ever necessary to find what a haversack contains.

Due to the interdimensional folding required to make this item work, a character can never carry more than one magic haversack at a time (even though there isn't normally a limit on how many slotless items a character can carry).

A Handy Haversack is capable of carrying any number of objects, as long as their combined weight is no more than 1,000 lbs., and none of the objects is larger than 3 feet on two or more of its dimensions. Very long objects can fit just fine, but a long and wide object likely won't fit through the 3-foot diameter mouth of the haversack, and thus cannot be stored in the haversack. Retrieving any object from the haversack is a move action that does not provoke attacks of opportunity.