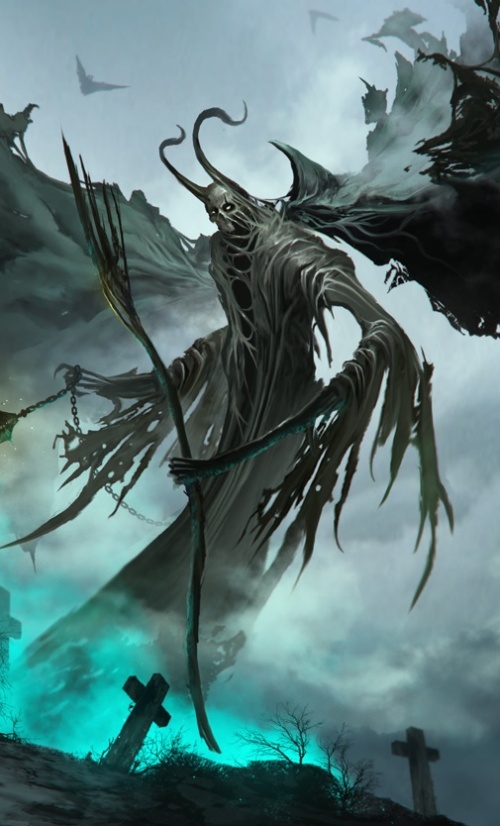 Things weren't going the way they had planned. Lars looked up at the huge specter looming above him, its black, tattered cloak billowing inches above the uneven ground of the ancient necropolis, and he felt the blood drain from his face. Its aura washed over his, and he knew in his heart that he and his companions could never defeat it. Though the ghostly giant before him had no face within its deeply-shadowed hood, Lars could feel it gloating, hungrily anticipating his death.

"Snap out of it, Lars!" yelled Tabriss, a silver glow surrounding her armor-clad body. Tabriss moved her hands and chanted warmly, calling upon the blessings of her goddess. As the spell completed, silver light washed toward Lars, settling over him like a mantle. Lars felt a warm reassurance as the blessing filled his heart with courage, and the icy spikes of fear vanished. Now that he could think clearly, Lars realized that the specter had messed with his mind, forcing him into despair and a loss of hope. Lars lifted his shield higher, and glared ferociously at the specter, growling a challenge at it as he went into a high guard, then hacked his sword underhand into the monster's towering form.

The sword hit its target, but seemed to have little effect, passing through the incorporeal body with little resistance. Only the tearing of a small rent in the cloak of the apparition indicated that his weapon had had any effect at all. Despite this seemingly ineffective blow, the specter's attention, which had been drawn by Tabriss' use of divine energy, snapped back to Lars at his unusual strike. Lars smiled a grim smile at this, knowing he was far more capable of absorbing the attacks of this monstrosity than his friend was. His heavy armor, massive shield, sturdy magic items, and fighting expertise in brutal close-quarter combat made him unnaturally durable against attacks. While Tabriss was no slouch in a fight, her defenses were nowhere near what Lars' were.

While all of this was happening, a small figure in dark leather dashed past Tabriss toward the specter, leaping at the last moment and kicking off of a nearby tombstone to gain some extra height. Arnsibel, a small figure with a fur-covered face and large incisors, twisted gracefully in the air to use his momentum to push his expensive and deadly bladesilver saber into the specter's exposed back. Arnsibel made it look easy. The saber slid into the specter, once again passing through its ghostly form a bit too easily, but this time a massive gash was torn into its form. The specter let out an odd moan, like air leaving a rotted bellows, and stumbled forward from the force of the blow. Arnsibel, perched atop the horrifying fiend, paused a moment and quipped, "Hey, you know, I was thinking about buying a pony when we get back to town. Or maybe a boat!" The specter lurched, grabbing back at him, and Arnsibel promptly back-flipped off his perch.

He made it look annoyingly easy.

Arnsibel landed on his fuzzy little feet, smiling as he apparently thought fondly about his new boat, and hastily ducked under the specter's backswing. Its massive arm, the size of a small tree, whipped through the air with alarming speed, passing just scant inches above Arnsibel's upstanding ears, but Arnsibel did not back away. "Or maybe we could get a dog!" he said. Lars pressed in closer, keeping the pressure on the specter.

It had taken weeks of searching for their troupe of adventurers to find the entrance to the valley, despite having purchased a map from a passing tinker. The Bone Garden was a bad place, it was as if the world itself was trying to forget it, but the graveyard could still be found if you tried hard enough. The cemetery stretched across the floor of the valley as far as the eye could see, dotted with headstones and mausoleums arrayed in no discernible order, clustered in groups like some hastily-organized granite slab convention. The moonlight cast a wan light across the landscape, and the scuttling clouds slid their shadows over the ground like circling predators. They had been attacked just moments after they had set foot inside the massive gates.

The fourth member of their troupe, cautiously trailing behind, was Llodwynn, a dour-looking sorcerer with onyx-colored skin the texture of stone. Llodwynn towered over them all, his size daunting, but his disposition was timorous and he detested combat. Instead, he finished a spell, its actinic blue light shuddering in rapid flickering arcs and reflecting off of his angled features. The spell shot toward the specter and, unlike the weapon attacks of his companions, dealt terrible damage to the undead titan, seemingly ignoring the specter's incorporeality. Llodwyn spared a glance for Arnsibel, and rumbled, "What would you want a dog for? To ride?"

"No, silly. You don't ride dogs! You give them names with terrible puns in them and teach them tricks that serve no purpose." Arnsibel, for all his silly banter, was all business as he rolled around the huge specter to sandwich it between himself and Lars.

"Of what use is that?" Llodwynn inquired, as he started casting another spell.

"Well, not much I suppose. But they're much fluffier than a boat," said Arnsibel.

"Hey! Here's an idea. Maybe you should pay attention to the fight," Lars suggested. His close press against the specter's space, combined with Arnisbel's move behind, successfully drew its next massive tree-trunk swipe his way. Lars almost smiled as the massive strike slammed off his shield, doing nothing to him. In response, he pressed the monster even harder. He noted Tabriss swinging a bit wide, busy casting another blessed silver spell, this one aimed at Llodwynn. Good, keeping the sorcerer well-protected made most fights end quickly.

Just as Arnisbel was about to respond with another quip, Lars noticed the little fuzzy scoundrel's ears prick up, and over Arnsibel's shoulder saw that three more specters were gliding toward the party. Arnsibel shouted, "Flank to my rear!" Lar's eyes widened. Arnsibel was supposed to get away from flanks, but if the little guy did, Tabriss was the most likely one of them to draw the charging specters.

Arnsibel caught Lar's eye, and his tiny grip on his saber tightened in readiness. The scrappy little Nagdyr wasn't going to budge, which meant that Lars was going to have to do some very stupid things to get this mess back under control. Things were about to get interesting!

What Is Epic Path?

Epic Path is a tabletop Role-Playing Game based upon the tried-and-true D20 gaming mechanics. This means that players and the game master roll 20-sided dice to determine the success or failure of various game actions.

Now...that sounds like Dungeons and Dragons, doesn't it? Indeed, yes, Epic Path is very closely related to DnD (as it is affectionately known). Epic Path also takes a tremendous amount of inspiration from the game Pathfinder, which is also a D20 game. We also acknowledge influences from many other sources, not least of which is the classic game Champions (very much NOT a D20 game) as well as the spirit of numerous more obscure others, such as Amber, Runequest, Tekumel, and so many more that it is impossible to list them all. And no, despite the abundance of rules in Epic Path, Rolemaster was not one of our insipirations, even though it might feel like that sometimes.

Epic Path is part of the Open Gaming License, and we offer these rules on our website for free, to anyone who wants to have fun with their friends. But, Epic Path is NOT designed as a simple, easy, basic game for beginners. Epic Path can definitely be played as a beginner game, as the rules are organized so that you never need to look at too much stuff at one time, but Epic Path really shines when you have long, stable campaigns that tell big, complicated stories. Epic Path is designed for players who have tried easier, simpler games, and after playing them for a while, have reached the limits of those systems and want to try something a little deeper, wider, and higher. No matter if you are a fresh-faced beginner, or an experienced veteran gamer looking for a deep, rich system to grow into, we hope you enjoy your stay!

Why You Should Play Epic Path

Why You Should GM Epic Path

If you're new to role-playing games, here are a few links to get you started:

If you've played D&D or Pathfinder already, you are already familiar with the basic rules for Epic Path. While Epic Path has changed a lot of things, the core rules remain (mostly) the same. You may want to jump straight to the good stuff: