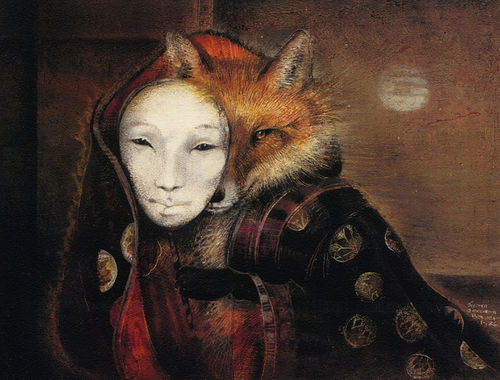 Beautifully subtle, a glance in the moonlight, then farewell.

Of all the intelligent races, there are several that are aligned with animal spirits. The story of their origin is vague, but no matter where you go, the same general outline is agreed upon. That outline goes something like this:

In the Dawn Times, there were several civilized intelligent races. Who was the First Race is a matter of debate, but there is no doubt that there were Elves, Dwarves, and Humans very early, followed closely by Gnomes and Halflings. For a very long time, these were the dominant races.

After the Dawn Times but still very long ago, there were many animal Gods who wished to also have a race of intelligent creatures to worship them. As a result, there came to be hundreds of intelligent races, many of them aligned with animal spirits. This was a period of great strife and chaos as all the multitude of races strove among themselves.

Eventually, the Gods decided there would be a great contest, and from the hundreds of intelligent animal races there would be chosen five, to match the number of the First Races. The details of the contest can be found in thousands of myths all over the world, but in the end, there were indeed five animal races chosen to Bear the Spark of Civility.

Those five races exist to this day. The races that lost the contest were understandably bitter, as they were relegated to a lesser role. Some races, like the centaurs, moldered away into decline. Other races embraced their lesser status as a matter of pride, like the gnolls.

Of the five races who won that Great Contest, all are available as player races, as they have the Spark.

One of those races is the Kitsune.

The Kitsune are unique, in that they are not a natural race arisen by the Gods. Kitsune are descended from actual foxes, who gained intelligence over the course of ages through their own diligent work. Kitsune most often appear as red foxes, although due to their magical prowess, quite striking silver and sable Kitsune are often seen as well. The Kitsune are driven, and have been driven for ages, on their quest to rise above their base animal origins and become real people, humanoids like everyone else. In early history, it took Kitsune centuries of effort to learn how to 'pass' as human. Today, after the Great Contest, Kitsune are born with the ability to pass.

Sadly, Kitsune are still not satisfied. Kitsune are still born as animals, and their true form is still that of an animal. Kitsune, during the Great Contest, tricked their way into winning, and thanks to their trickery, even though they were declared one of the five winners, their race received far less of the Spark than the other races did. As a result, Kitsune still suffer their lowly animal origin. Kitsune are shamed by and utterly despise their lowly nature and desire nothing more than to rise above their ordained place in the world and become as 'human' as any other race which nobly possesses the Spark.

This deep, secret frustration, this sense of inadequacy, drives a Kitsune's innermost self. Every Kitsune secretly hates their Walks Among Us power. They all wish that it wasn't needed; that they were 'real' people, instead.

Kitsune are con artists. Every minute of every day, they are working the rubes around them convincing them that they are a person, not an animal with a clever spell. Once a kitsune accepts that they must live a full-time, full-life con-man's deal, the notion of perpetrating other deceitful wordplay becomes almost secondary. As a result, Kitsune have a reputation as being untrustworthy and oath-breakers. In truth, this reputation is usually pretty close to spot-on.

Yes, there are many fine, honest, and upright Kitsune out there, but in the grand scheme of things, they are a fairly small number of the total species. Kitsune know how to sweet-talk and cajole and persuade, it's in their makeup. Kitsune are not terribly rare, but Kitsune never form their own settlements. Indeed, many people you meet who seem to be another race are secretly Kitsune.

That said,Kitsune have a strong sense of their own culture. They are animalistic and easily swayed by the phases of the moon and the turning of the seasons. Kitsune don't really celebrate holidays of their own, because of their animal nature, but they participate in all the observations of their neighbors with delight.

The one driving thing in Kitsune culture is trying to work out some way to make themselves truly humanoid. Kitsune are too fractured to work in any organized way toward this goal, but they universally work in the same direction, whether they realize it or not.

Aside from that, many kitsune take the 'easy way' out, and make their way through life as tricksters and con men, delighting in the gullibility of others and leaving nothing behind but red or silver or black fur all over the fine sheets.

Kitsune can find each other pretty easily. While they do not have their own separate towns and villages, they will often have a separate 'shadow world' set up and running in a larger city, such that there is a Kitsune-only tavern, a kitsune-only school, a kitsune-only neighborhood, etc. In such places, kitsune let down their guard, a little, and find mates and friends. Kitsune families are remarkably mundane, a male and a female mate and a litter of kits arises in the usual way. Kitsune have litters, with between 2 and 5 kits being the most common number. Kitsune do not often have more than one litter, in most cases, although they certainly could if they wanted too.

Mated kitsune pairs usually break off after about twenty years and all the kits are grown. There is no bitterness about such things, it's simply that kitsune feel the need to walk their own path.

Kitsune kits are raised strictly in secret until the age of three or so, when they master their 'Walks Among Us' ability. That is the age when the young kitsune chooses the appearance of their humanoid persona that they will keep throughout their entire life. This is not a process to be taken lightly, even at the young age of the kit, and responsible parents will try to curb the kits wilder experiments, like having three eyes and such.

Once a kitsune kit has mastered their Walks Among Us ability, they seamlessly integrate into whatever larger culture they inhabit. Note, however, that kitsune never completely shake their animal nature, and thus have a fondness for catching and eating rodents and birds and other small prey for their entire lives. When a kitsune buys a caged bird for their mother, it isn't because the bird sings so sweetly....

Kitsune aren't exactly bad for a society, but neither do they contribute a great deal, in most cases. Kitsune are grifters and hucksters for the most part, and because of their independent natures, are not terribly likely to form into organized crime. As a result, Kitsune are frequently in conflict, either openly or covertly, with thieves guilds and assassins guilds that may be operating in a given area. Aside from that, Kitsune's tend to spend their lives quietly, nipping off a gullible mark here and there.

When a Kitsune tends to make a bigger impact on society is when they get political. Something about Kitsune's and politics mixes very well, and it is fortunate that few Kitsune have the patience to endure a political lifestyle. Kitsune make superb spies, spymasters, advisers, regents, and otherwise act as 'the power behind the throne.' In this role, Kitsune mesh well with Mallori, and frankly the two races, despite being utterly alien to each other, get along extremely well...if not trustingly.

Kitsune adopt all of the holidays and mores of their host culture while they are in the guise of humanoids. But, when they are in their secret, shadow community, in the places and dens among their hosts where all the kitsune congregate and let down their guard, they have an entire other set of customs, as rich and varied as any other race.

Kitsune celebrate Summer and Fall as the principal seasons, one for comfort and one for change. Kitsune have many elaborate methods of meeting and greeting one another, which seem to outsiders like playful 'dances' and tussles and bouts of fierce mock-growling. Kitsune find status among themselves to be important, but not nearly so rigid that they have anything like an 'Alpha' structure. Kitsune simply like knowing who is in favor, and why, and who is out of favor, and of course why.

Kitsune love rich tidbits and delicate flourishes, and will often bring songbirds and pretty mice as treats and gifts. They also adore more conventional food, and will partake with gusto, although rare indeed is the Kitsune who eats heavily: They have a spirit's appetite, which is to say, hardly any appetite at all.

Kitsune interpersonal relationships are incredibly byzantine and convoluted, as their tricksy nature practically forces them to gossip and connive and canoodle in every direction at all times. Married kitsune are almost never faithful and indeed, such is not expected on the part of either party. Kitsune marriages are about raising the kits up right, and that's about the beginning and end of it.

Oddly enough, Kitsune rarely involve each other in their various confidence schemes and grifts. Indeed, it is considered great sport to cultivate a 'stable of marks', or, a group of friends who are trusting and gullible, and upon whom the Kitsune can run the most convoluted and remarkable of con games. Many Kitsune set up these cons so they can 'help' their neighbors in some way, but others are not nearly so benign. Having a playful Kitsune as a friend and confidante, someone who is looking out for you, can lead to remarkably good luck...with the occasional exciting chase by the Town Watch.

Kitsune do not practice burial rites, per se. A kitsune who dies of old age is usually left in some exposed spot so their body can be scavenged, and so return to nature. The skull is often recovered and kept in the family place of honor.

Kitsune tend to like humans, a trait they share with Gata, although in all other ways Kitsune cannot abide Gata in the least. Gata dislike Kitsune right back, because Kitsune, due to their animalistic nature, are far too fond of killing and eating pets for a gata's liking. Kitsune work well with Mallori, and the two races often find themselves working in the shadows, either together or at odds. Both Kitsune and Mallori find these competitions fun and exciting. Oddly enough, Kitsune dislike Changelings, not least because Changeling vision is not fooled in the slightest by a Kitsune's wiles and they always can spot a Kitsune instantly. Granted, Changelings are so achingly polite and desirous of blending in that they'd never dream of outing anyone, but still, Kitsune's don't like knowing their secrets are so easily laid bare by the newcomer race.

Kitsune, like all the animal races, dislike Vishkanya intensely. Kitsune's had to con and fight and cheat and steal their way into their portion of the Spark, and got only the smallest, most meager portion of it to boot. It enrages and insults every Kitsune that the snakey newcomers gained their full portion of the Spark of Civility by ACCIDENT. Kitsune on Vishkanya violence is rare...probably. With kitsune, it can be hard to know the exact species of a person attacking a vishkanya.

Kitsune have no class or alignment restrictions.

All Kitsune have the following Standard Racial Advantages: