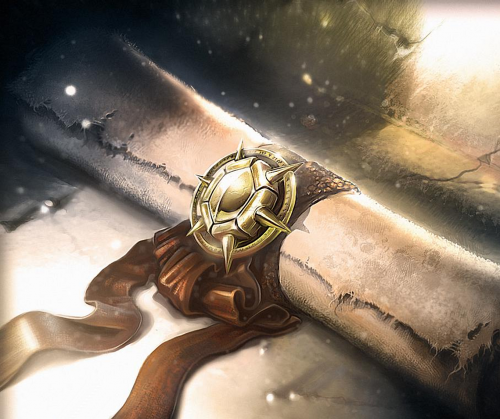 A scroll is a spell in written form, that contains all of the magic necessary to cast the spell within itself. As a consumable, once the spell is read aloud, the spell is cast and the scroll crumbles to dust as its magical energies are used up in the making of the spell. All spells are available in scroll form. However, Alchemist Extracts and Ranger Poultices, which are not spells, are not available as scrolls. Put another way, any spell from the following spell lists is available as a scroll:

Only one spell can be written in a scroll.

Sorcerers, Wizards, and Bards may transcribe the contents of a scroll into their spellbooks, as a way of learning new spells. This is done instead of reading the scroll, but still uses up the scroll in the process.

Arcane spell failure chance, either from armor or a shield, has no effect on spells cast from scrolls, since casting a spell from a scroll does not require you to use any somatic components.

Scrolls do not use the character or caster level of the reader, nor the reader's ability scores, feats, skills, racial traits, or class features, including Mana Burning. Only the creator level of the scroll itself matters, with regards to how powerful the spell being cast actually is.

Scrolls can instead be purchased at higher creator levels than their minimum, up to level 35.

In most cases, scrolls available for sale in a shop will be of the minimum creator level sufficient to cast the spell, but characters can ask that scrolls be specially crafted at higher creator levels, if a creator of sufficient level can be found, who is willing to do so. Guidelines on the level of Creators that can be found in a settlement of a given size is available on the Money and Merchants page. GM's are encouraged to make NPC creators fun, eccentric, and interesting, although this is not strictly required.

If a character has the Creator (Feat), they can attempt to make their own magic scrolls, and the scroll can be any creator level up to the character level of the creator.

The creator does not need to be able to cast the spell that the scroll will be able to cast, though it certainly simplifies matters if they can. If they cannot, they must find a remnant of a tier sufficient for the creator level they are attempting (see table below), and they must find some object that is symbolic of the spell they are attempting to enchant onto the scroll. If the creator can cast the spell themselves, they do not need a remnant or a symbolic item. (See? Much simpler!) In such a case, the creator does not suffer the normal penalties for having no remnant or symbolic item.

The cost to create the scroll is half the gold piece value of the scroll if it were bought in a store (see table above), minus the cost of the symbolic item (if any).

Other than the time required to create a scroll, crafting a magic scroll follows the normal rules described in the Creator (Feat) page, and on the Craft Magic Item skill use for your Bailiwick skill.