Difference between revisions of "Pirates Eyepatch +4" 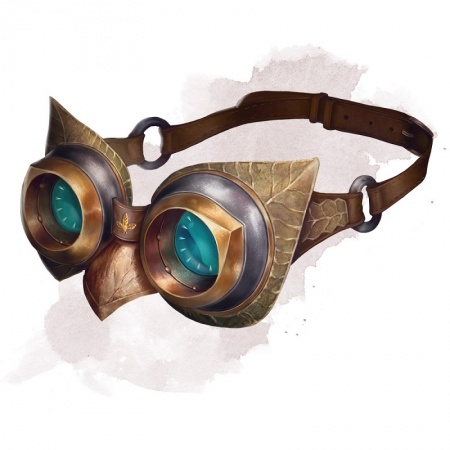 A Pirates Eyepatch is a small, generally opaque, piece of material that is held tightly over one eye. They work whether there is an eye behind the patch or not, although in the traditional piratical lifestyle, wearing an eyepatch over a healthy eye is considered poor form. Pirates, Swashbucklers, Corsairs, Privateers, or plain old Bandits, all have a particularly swaggering, chaotic lifestyle, emblemized by exotic manners of speech, odd pets, and weird rules, that are followed or ignored as the mood sets in.

Few things are more perfectly piratical than the scarred face and eyepatch, to show that THIS person is not to be trifled with! Eyepatches come in many designs and styles, from a scrap of dirty cloth tied around the head to elaborate gold and jeweled designs with magically animated glowing eyes on them, and all manner of things in between.

The Pirates Eyepatch, regardless of how it looks, grants numerous benefits to the wearer.

The first and most basic function is, a Pirates Eyepatch restores the vision of a lost eye. This has the effect of making the wearer Immune to the Blind condition for normal vision. They are still susceptible to Blind against all non-normal vision senses (such as the confusingly named Blindsense), as well as Blind against all hearing or other senses. But no matter how impaired their sensorium becomes, the wearer of an attuned Pirates Eyepatch always has normal vision, unless the item is Stolen or Sundered.

Stronger versions of the Pirates Eyepatch grant increasing additional benefits, as detailed below:

A Pirates Eyepatch +4 adds Immune to Blind versus normal sight, as do all such items. In addition, it: