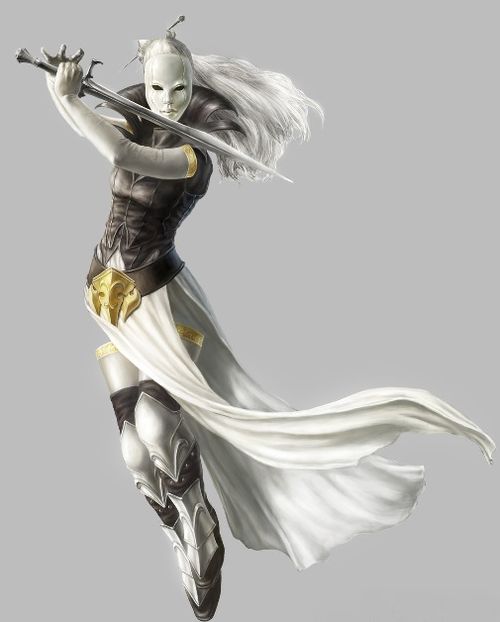 As free as the wind

Sylphs are an unstable blend between airy native creatures of the Upper Air and the flesh creatures of the surface. Long ago, these airy spirits melded with humanoids, and from that union sprang the race of the Sylphs. Sylphs are fairly common, for an exotic race, and their habit of traveling widely means they seem even more common than they are.

Sylphs look like humans, with an alien tinge to their features, hair which is the colors of the sky (creamy white, stormy grey, sky blue, sunrise orange-gold and sunset orange-pink are the most common), and eyes most commonly either blue, grey, or white. Their skin can be of any shade of humanoids, but tends to be rich tan or occasionally, goblinoid green

Sylphs are often nomads, although this is by no means a rule for their culture. When they do settle down, they often build villages as high as they can, living on high mountains and in the tallest trees of the forest. Sylphs follow the usual humanoid patterns, with male and female couples bearing children in the usual way, marriages being common and long-lived. Sylphs tend to mate for life, and they take family very seriously.

Sylphs that have settled down are cautious in their dealings with others, and will use their remote villages as a defense against more populous races. Many sylphs have powerful racial abilities which they will use to earn their way in neighboring cultures. Watching a Sylph with flight and a high Strength muscle a church bell straight from the ground all the way up to the very tip of a tall steeple is an amazing feat to witness. Sylphs tend to be stand-offish, and rarely if ever will they settle in with a larger culture and live among them. Sylphs much prefer their own company, and will go to considerable lengths to maintain their privacy and their isolation.

Sylph culture is an odd mixture of rabid freedom-loving dislike for authority combined with a fierce loyalty towards friends and family. Sylphs value their personal relations very highly, and tend to like other Sylphs a great deal more than other races. They are not exactly xenophobic, but they certainly have that tendency. Sylphs marry for life and they don't take that bond lightly. As a result, many Sylphs marry considerably later than other races. Luckily, Sylphs are well adapted for their females to bear pregnancies easily, as their children are formed almost entirely of air. A pregnant Sylph looks like she's always in the middle of a gusty windstorm, as her child forms slowly and carefully in the air around her. Pregnant Sylphs avoid bodies of water and bad weather, as water on the baby before it is born is very bad for the child and the mother both.

'Birth' for a Sylph involves the gusty nucleus of wind separating from the mothers aura, but for the first three or four years of its life, the child remains a creature of almost pure air. A Sylph child must attach itself to the aura of one or both parents for at least sixteen hours a day, although after 'birth' they are no longer vulnerable to water. After 36 to 48 months of gaining sustenance directly from their parent's aura, the child Sylph will one day manifest a flesh and blood body, usually in their sleep. From that time forward, their development parallels the usual humanoid model.

In Sylph culture, everything is centered in the family: All children are home-schooled, businesses are family owned and operated, and there is very little governance or structure, each clan doing as they wish.

Sylphs are tremendous artisans, explorers, trackers, and scouts. They have strange and powerful abilities that are rare among intelligent humanoids, and their skills are almost always in demand. Sylphs with flight are in tremendous demand as ship riggers, watchmen, couriers, and many other professions.

Sylph settlements are rarely in large cities, and when they are they usually involve homes in a few very tall towers with lots of locked doors. Many sylphs live close to other races though, and Sylphs are generally seen as clannish but sought-after neighbors. Sylphs, if you are able to earn their friendship, are good allies to have, but earning the trust of a Sylph is no small matter.

Sylphs have their own calendar, based upon the cycles of the heavens, and their own system of holidays, based upon the processions of the stars and other heavenly bodies. They have many holidays, and celebrate birthdays within their families with great enthusiasm. Birthdates that are shared between two members of a family are considered tremendous good omens, and any such dates will be celebrated with at least several days of fetes and the lavish exchange of gifts within the family.

Sylphs have many valuable skills and abilities, and tend to be prosperous due to this. This makes them the target of thieves, of course, but robbing a sylph home is chancy business: Sylphs have frighteningly good senses and like to build homes that are tough to reach, much less break into.

If you are a Sylph, your family is expected to set you up in life, but no other Sylphs will raise a finger to assist you. Sylphs who adventure are surprisingly common, given how attached they are to their families, but it is considered 'broadening' for a young Sylph to be away from their family for a few years, so they learn to value their relations even more when they return, hopefully bearing many gifts and treasures. If an adventuring Sylph happens to drop in for a family visit, their adventuring buddies will NOT be welcomed. Sylph families view adventuring 'friends' with a degree of suspicion verging on paranoia, but if you can earn the trust of a Sylph family to the point that they adopt you, then you are set for life: Sylphs take family very, very seriously indeed.

As a rule, Sylphs do not recognize local authorities. They do not send their children to school, they do not pay taxes or gain licenses, they do not join watches or serve as soldiers. This causes a great deal of friction with other races, but if a Sylph family is harassed too much about such things, they will not hesitate to leave and wander as nomads for a time. Losing an enclave of Sylphs in such a way almost always is a blow to the local economy, so wise rulers simply put up with the Sylph's dissociative ways.

Sylphs live about the same length of time as humans do, and have a definite childhood and adulthood. Unlike most races, however, Sylphs do not ever suffer from the ravages of age. They do not have a middle age or a dotage. Once they reach adulthood at the age of twenty, they live, more or less unchanged, until they reach the age of ninety or so. A Sylph in their eighties looks identical to a Sylph in their twenties. As a result, many Sylphs begin their adventuring careers quite a bit later than a human would, since they maintain their vigor much longer.

When a Sylph reaches the end of their lifespan, there is no warning. One moment the Sylph will be talking and acting normally, and the next instant, there is a powerful gust of wind and their empty clothes fall to the floor. Death due to age for Sylphs is sudden and comes in an instant. As a result, Sylphs of great age tend to treasure every day as if it might be their last, because it is literally true. Curiously, Sylphs that die of accidents or violence leave physical bodies behind; only old age causes their forms to abruptly disperse.

Sylphs have no burial customs, since they leave no bodies, but they have a fantastic set of funerary customs. A wake is held, and the lost Sylph is mourned and remembered with great enthusiasm. Sylphs at a wake are almost always melancholy. Sylphs are blessed by avoiding the infirmities of age, but they pay heavily for that by suffering decades of uncertainty instead. Only at a wake is this fear of their sudden demise addressed, and wakes are a difficult time for Sylphs.

Sylphs are not exactly forthcoming with strangers, so their relations with other races are minimal. Sylphs don't feel superior or threatened by other races, they simply want to devote their energy to their family. Pugnacious races such as Bru-kin, Humans, and Nagdyr frequently find Sylphs to be difficult neighbors, while easy-going races like Halflings, Changelings, and Vanx get along with them swimmingly, if a bit...remotely.

That said, Sylphs are valuable neighbors to have. Their trade goods are top-notch, they have rare, useful, and valuable racial abilities, and Sylphs are almost the ideal sentries. If a Sylph enclave suddenly evacuates, its a good idea to follow them. They have probably seen something coming that you don't want to be caught up in.

A good proportion of Sylphs follow a nomadic lifestyle, and seem to prefer boats and barges over wagons. Nomadic Sylphs still have the same caution when dealing with strangers, but they also tend to be a bit more accepting and cosmopolitan. They certainly don't warm up to strangers any faster, but they are a bit less actively suspicious. Adventuring Sylphs come equally from settled and wandering families.

Sylphs have no class or alignment restrictions.

All Sylphs have the following Standard Racial Advantages: