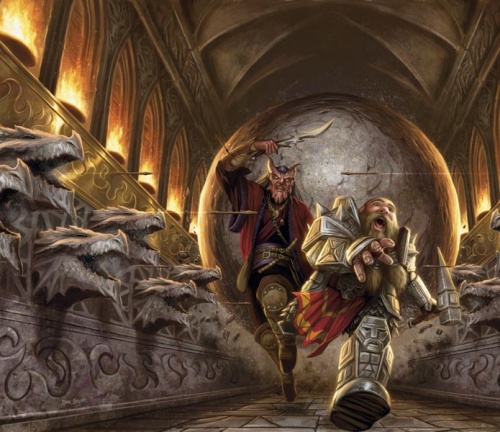 There are several ways for a GM to present an encounter with one or more traps:

The simplest, and perhaps most well known, means of presenting a trap is a single trapped object, such as a trapped door or trapped chest. This is a relatively simple pass/fail test that might inflict a little bit of damage on one or more characters in the party (and potentially an annoying condition), but most often will just slow them down a little and let them know that they are in a dangerous place.

A trapped object could be literally anything, from a doll on a shelf, to a scroll, to a window, but generally, there should be some reason that the object was trapped. Most creatures that trap an object do so with the intention of capturing, disabling, scaring off, or killing someone who attempts to go somewhere they are unwelcome, or who attempts to tamper with something that the owner doesn't want messed with. Of course, some creatures (like goblins) may trap a child's toy just for the sheer evil amusement of leaving it for some hapless child to find.

In any case, there are two skill checks involved with a trapped object:

The perception check is usually an active check, rather than a passive check, though some crude traps might be so obvious that the GM will allow passive checks. The only creatures that are allowed to make the perception check are those who are either touching the trapped object (in the case of an unattended object, like a chest), or those who are adjacent to the trapped object (in the case of a structural object, like a door or window).

As a general rule of thumb, only creatures in the 'danger zone' of the trap can attempt to perceive the trap.

If the trap is perceived by one or more creatures, someone can attempt to disable it before it is triggered. Again, this check can only be made by someone who is touching the object (in the case of an unattended object, like a chest), or those who are adjacent to the trapped object (in the case of a structural object, like a door or window). This is also the case with assisting the skill check -- the assisting character must be touching or adjacent, as appropriate, in order to assist.

There are three possible outcomes:

Trapped objects deal damage depending on a few factors:

A single target trap will typically inflict more damage than a trap that affects an area. A trap that inflicts a status condition will typically deal less damage than one that doesn't. In nearly all cases, the trap should allow a Reflex saving throw versus a CR-appropriate DC, for half damage and no condition.

The following table provides some sample damage numbers for traps at various CR's:

An architectural trap can be either a mechanical or magical trap or hazard that is built into the terrain. The classic example is a room with two doors and three levers on the wall. What does it do?! Architectural traps can be as simple or dynamic as desired, and can include classic 'puzzle rooms', areas of a dungeon that rotate to cut off movement, teleport rooms that send the party to an unknown area, pocket dimensions that require an entire series of quests and adventures to re-open and many, many other things. Let your imagination run wild!

In general, these sorts of traps are meant to break up a long string of fights with a more puzzle-y or role-playing type of encounter, in the absence of NPCs to interact with. They can also be useful story hooks to imply that clever creatures inhabit this location, and to foreshadow the presence of more dangerous traps to come.

Sometimes the party knows a room or passageway is full of traps, and just wants to get through them all without dying. Traps are always a tricky proposition for a GM, since they're not actually all that exciting for players, even when they're playing the thief who can actually disarm them. For the thief, it's just a skill check, and for everyone else, their health and well-being hinges on just how good that skill check comes out. Not exciting, just annoying. Instead, make it a group check, after someone spots the first trap, to have everyone try to navigate through this parade of swinging-blade-, poison-dart-, spiked pit-, sharks with laser beams-filled Hallway of Death™.

As with the other examples, these results should be changed up each time, but can be used as a guideline for what is reasonable.

As you can see, group skill checks are extremely useful ways to quickly abstract part of an adventure when the action might otherwise lag. They're simple to adjudicate on the fly, and can still be exciting for a party if applied well.

Trap encounters are the classic dungeon 'big scary traps' that the players have stepped into. The classic is the 'crushing room' trap, which is well represented below. We present a selection of such Encounter traps below, each of which is designed to be integrated into a combat as part of the battle, because a crushing room trap is so much more interesting when it has a batch of lunatic goblins in it WITH you, trying to kill you before the trap gets everybody.

These trap write-ups are designed to be used with the The ConTRAPtion, and can adjust the CR to match any campaign, and then Complications can be added to keep traps from feeling monotonous. Have fun tormenting your party, but remember, always be fair!