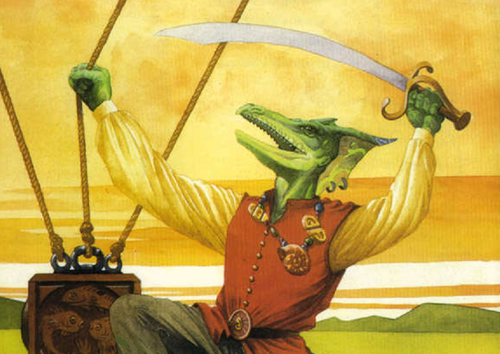 As the river flows, so flows life.

The Vanx are a race of slender but sturdy lizaroids. Native Vanx communities tend to wear very little clothing, relying on netting to hold tools and possessions and minimal clothing for modesty. Their skin is usually very smooth and soft and does not have any scales at all in most cases. Uniquely, Vanx exhibit seasonal color variations. Vanx coloration tends to a myriad of light and dark green shades in the summer months, darkening to near-black on the back and creamy gold on the belly in the winter months.

Vanx have two arms and two legs of human appearance aside from the transparent webbing between fingers and toes. They have no hair but do possess between one to seven fins on their heads which are at least as varied and distinctive as human hairstyles. Indeed, vanx can even cut decorative designs into their head fins if they wish, and the fins regenerate over a period of weeks, regrowing similar to hair. Vanx faces are handsome but very non-human, with a large muzzle similar to a gecko's which integrates their mouth and nose, with quite lizardlike eyes (their pupils are vertical slits and their irises are green-to-gold with spots of widely varied colors such as blue, purple, orange, red, back, green, etc). The most distinctive Vanx feature is the two large round tympani organs on the underside of their jaws, which is where they generate much of their tremendously loud speech and native sonic attacks.

Vanx like water and are very good in it, but do not need water to live. That said, Vanx-dominated lands are easy to distinguish because of the myriad of canals and waterways which webwork the land. Surprisingly, Vanx do not like swamps in the least, and Vanx settlements in such areas work diligently to drain the swamps and create waterways and canals instead.

Vanx are technically Outsiders, but they have been on the Prime Material Plane for so long they have no racial memories at all of their forgotten home realm. Vanx are well adapted to the Prime Material and have thrived here. The only reason Vanx are not even more prevalent is the fact that they prefer to live near rivers and waterways, and to make a settlement comfortable by their standards requires a great deal of digging of canals or building out over lakes.

Vanx are not rare. Indeed, some estimates place Vanx as the third most populous race, after Humans and Dwarves. Vanx do not seem as common as they are, because they tend to stick close to their well-watered river-lands, where they have huge pier-based cities and dizzying arrays of canals dug to provide more living space. Vanx do not need water to live, but they greatly prefer it and are willing to work hard to make their living areas comfortable. As a result of this work, Vanx tend to pack in tight where they have comfortable conditions, so a lot of Vanx fit into a fairly small space.

In their niche, Vanx are as varied and adaptable as humans are, which is saying something. Vanx, despite their water-loving nature and great preference for open water, do not require water to live and can survive perfectly well even in deserts. In their more common habitats, most Vanx are industrious, hard-working sorts who greatly enjoy their community and their co-workers.

Vanx are almost boringly prosaic in their personal lives. They normally marry and mate for life, the female lays fertilized eggs that hatch immediately. They enjoy fish and other meats, as well as a wide variety of other foods. Despite the fact that they have snouts they can chew a fully omnivorous diet with no problems. Vanx tend to worship pragmatic gods of weather, smithing, crafting, farming, and of course, water.

The Vanx do not like the sea, however. Salt water stings their eyes and skin, and makes them cranky and irritable.

Vanx families follow the common model, male and female Vanx pair up, and pregnancies arise. Vanx females carry their young for several months, and are somewhat burdened by their egg. When birth comes, the female lays a single large egg, rather than birthing 'live'. Vanx are hatched from these eggs, usually within minutes of the egg being laid. Vanx grow over several years, with childhood, maturity, and dotage according to the usual pattern. Vanx are well-integrated into human and other races cultures.

Large human coastal cities will frequently have a large Vanx population, although in such mixed cities the Vanx tend to gravitate to a more aquatic life-style, and so, they seem less common than they really are. Vanx in mixed communities will happily attend the same schools, work the same jobs, and drink the same beers as their more land-bound neighbors. Most Vanx have a father and a mother who live and work together to raise the young Vanxlings.

Vanx are hard-working and industrious. They are master-class craftsmen, building tools and boats which they use to build and maintain canals and waterways, tame rivers, construct locks and weirs and dams and all manner of other things. Vanx tend to settle into either air-centric or water-centric lifestyles. They will take jobs in their preferred environment and spend more of their time in either air or water, depending upon their predilections.

Vanx raise fish and shellfish, oysters and kelp and coral in huge abundance. Vanx are economically impactful in their range because there are a lot of Vanx, and as a result, they have a great deal of economic activity, albeit in a relatively narrow range. Vanx export large amounts of fish and shellfish, seaweeds and corals, and import dry-land goods such as timber and metal tools.

Vanx have many spellcasters of both arcane and especially divine types.

Vanx tend to be very prosaic in their customs, with perhaps the only odd thing about them the tendency to run in 'schools'. Schooling is a Vanx phenomenon whereby they greatly enjoy crowds, of their own kind or other friendly races. Vanx have no trace of the unfortunate 'mob violence' tendency of humans. Indeed, if anything, a school of vanx is actually more easy-going and mellow than individual Vanx, since each Vanx in a school feels safe and happy among others.

This enjoyment of close company is another reason Vanx seem more scarce than their numbers would merit: A LOT of Vanx will fit comfortably into a space smaller than seems possible to other races, and they'll all be as happy as clams about it.

As a result, many races find Vanx-dominated group events to be very uncomfortable. A busy Vanx bar may look nearly empty, but might have twenty Vanx all jammed in right next to each other at one end of the bar, chatting amiably in their thunderously buzzing voices.

That said, Vanx are LOUD. A normal speaking tone for a Vanx will carry for hundreds of feet easily, and if a Vanx raises his voice, it causes literal sonic damage. A school of Vanx is a very happy, peaceful place, but a school of Vanx can also efficiently kill anyone who startles them. Mixed neighborhoods of Vanx and other races almost always includes very thick walls, sound-dampening spells, or both. This loudness is also another reason that Vanx in mixed communities tend toward aquatic life: Working underwater lets them talk without having to whisper all day.

Vanx live about fifty years, slightly less time than humans. They have a distinct childhood that is over by the time they reach ten years old. A Vanx is fully mature and ready to go adventuring at the age of ten. After that they follow normal human aging rules and times, they just reach each age bracket a few years earlier.

When a Vanx passes away, they are usually mourned and then buried in a floating casket (in less crowded areas) or buried in a low-lying wet piece of ground (in more crowded areas.) Deep wells into the water table are used as graves far from their beloved rivers and lakes.

Vanx get along well with other races, with the notable exception of Dwarves and Oreads. The stony races, to be frank, freak the Vanx out. No Vanx has ever been able to explain the hackle-raising qualities of the stony races, but the effect is undeniable. Tieflings and to a lesser extent Ifrit are also poorly tolerated, although most Vanx, sensibly, say that the whole 'fire' thing is the reason for that. Vishkanya, on the other hand, get along great with Vanx, and are often close to or integrated within Vanx pier-cities and canal complexes.

Surprisingly, the Vanx also have very little to do with either of the other two 'water centrist' races, the Grippli or the Undine. Why this is so is considered a bit of a mystery by the sages and mages and ciphers who explore such topics. On the face of things, it is easy to see why the urban, fresh-clear-water loving Vanx would have little to do with the swamp-loving Grippli, (indeed, Vanx actively destroy Grippli habitat as fast as they get close to it), but why do the Vanx have such indifference to the affairs of the roving Undine? The Undine's tolerance for saltwater is really the only extreme difference between the two races. So why are there no known Vanx/Undine partnerships?

Popularly, it is assumed that Grippli and Undines are both rare, while the Vanx have a narrow living range, and the races simply don't meet very often. This is a simple and plausible explantion, but on closer examination, has many flaws.

The most controversial theory is that the issue is related between all the races.

Namely, the Grippli are one of the Beastly races, and the Undines are one of the Spirit races, while the Vanx are an odd Outsider sport race. This theory holds that no matter their lifestyle similarities, these three races, and frankly, ALL such races, are fundamentally incompatible. This is a controversial stance, as it directly contradicts the effects of the well-known Spark of Civility, but the fact exists, Vanx and Grippli and Undines do not get along and commingle, when by all rights, they could and should.

When asked about this, members of all three races claim to have no idea why they don't associate, aside from vague feelings of 'unease' with the other races in question. Scholars of all sorts will doubtless examine these matters at length in the coming ages of time, but for now, it is a mystery.

Vanx characters have no alignment or class restrictions.

All Vanx have the following Standard Racial Advantages: