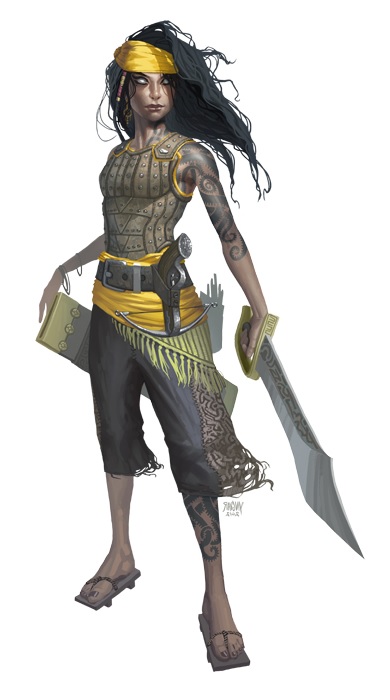 I'll show you a mistake!

Many races are old, and have vague origins lost to the depths of time. Not so the Vishkanya. They are the youngest race, barely two hundred years old, and their origins are well known, if not exactly well understood.

The story goes like this: A little over two hundred years ago, the Ophidian Screed was a hugely successful cult among the Naga. The Screed hatched a mad plan, under their mad masters, to remake the world into an apocalyptic hell, with themselves elevated in power and ability to serve as the tyrannical rulers. Unlike most Naga cults, the Screed was hugely successful. They researched the massive True Dweomer ritual required to remake the universe to their liking, they assembled the nigh-impossible to obtain ingredients, they found or made the apocalyptic tools required to literally End the World, and they did indeed complete their gigantic dark magic.

To say that it backfired upon them is putting it mildly.

Of the hundreds of thousands of Ophidian Screed cultists assembled in a mighty army, ready to rule their new hell, not one survived. The world was not destroyed or even mussed. Instead, the Naga of the Ophidian Screed were obliterated, root and branch, and in their place stood an entirely new race of lovely and quite nice snake creatures, called the Vishkanya.

Since that day, the Day of Becoming, the Vishkanya have spread and prospered. They are not exactly welcomed wherever the tale of their odd creation is well known, but in general, they are well regarded.

Vishkanya as a race have a surprisingly strong cultural identity. Vishkanya have a very distinct appearance, their skin being glossy and butter-soft, with just the merest hint of a dappled pattern reminiscent of scales. Aside from their amazing skin, Vishkanya have quite ophidian eyes and a definite reptilian cast to their otherwise humanoid features.

This unique appearance gives Vishkanya a powerful sense of belonging when they are with other Vishkanya. Vishkanya have quickly developed many small customs among themselves, such as greeting one another by pressing their cheeks together, or building their houses out of lime and adobe with at least one basking spot for sunbathing.

Vishkanya are a handsome race, and frequently live within other races enclaves. Vishkanya are populous enough that they have some small settlements entirely of their own, and they tend to favor warm or temperate climates. Vishkanya tolerate warm, humid climates well, their soft, slick skin not suffering from moisture like most races do.

Vishkanya get along well with many races, but they are highly compatible with the Vanx. Vishkanya cannot swim like a Vanx but they certainly tolerate moisture well, and the two races mesh extremely well. On the other hand, Vishkanya have a strong aversion to all of the animal totem races: Nagdyr creep them out with their filthy ways, Gata frighten them with their leaping power, Kitsune cannot be trusted with their magical disguises, Tengu have those terrible beaks, and Grippli are just slimy and grotesque. To be fair, none of the animal totem races like Vishkanya, either, viewing them as an upstart snake race that cheated to attain their place among the civilized races.

Vishkanya marry and have children much as any conventional race, and childbirth for a Vishkanya is very similar to the human model. Vishkanya, unlike Vanx, do not lay eggs, instead giving live birth.

Vishkanya have a quite prosaic family structure: A couple marries and has children in the usual fashion. Vishkanya have a lifespan similar to a humans, with a definite childhood, adulthood, middle age and senescence, as you would expect. Vishkanya mingle well with other races with a similarly prosaic style, and do surprisingly well among Dwarves, Vanx, Arborians, and Humans, of all things.

In their own enclaves, Vishkanya settlements tend to look a lot like human villages, except for the abundance of upper story windows that face the morning sun, for sunbathing. Larger Vishkanya settlements will have a large amphitheater-like structure called a Solarium where the Vishkanya will go to sunbathe communally. Perhaps the only odd thing about Vishkanya is the fact that they see being nude while sunbathing as perfectly normal. Indeed, to a Vishkanya's mind, being clad in sunlight is just as protective of their modesty as being clad in clothing...which might explain why Vishkanya get along so well with some rather surprisingly 'hard to like' races.

Vishkanya tend to be well liked and well tolerated by other races, except the animal totem races, with which they share a nigh-instinctive animosity. That said, Vishkanya rarely have any major impact upon the economy of settlements they live within. Vishkanya are not exceptional craftsmen or particularly good, racially, at anything that contributes to the economy. Vishkanya are quite good at getting along with others though, and they certainly do not detract from the communities that accept them.

Where Vishkanya excel is in the field of entertainment. Vishkanya can sing and dance and tell stories with panache and grace under the most trying of circumstances. Every community that values fun (and who doesn't!) like having the presence of Vishkanya to liven things up on festival day. And unlike Changelings, Vishkanya can actually thatch their own roofs.

Vishkanya are surprisingly prosaic in many ways. They tend to celebrate the holidays of their neighboring cultures, with the major addition of the Day of Becoming, which all Vishkanya at least acknowledge, even if they don't outright celebrate it.

Vishkanya are keenly aware of their own origin. They arose from Evil, pure and simple, and yet they have been changed by the cosmic-level True Dweomer into the opposite of their origins. Vishkanya are always aware, at some low, subconscious level, of exactly how to be nice in any situation. Most Vishkanya truly ARE nice all the time, but for some Vishkanya, this ancient compulsion to goodness is a source of endless frustration, proof that they are a made race and not a natural race.

Vishkanya generally work to integrate well with their neighbors and will gracefully accept that other races are ridiculously ignorant of how awesome sunshine is.

Vishkanya are not usually sun worshippers in the literal sense, but they really like sunbathing. Vishkanya who live with races who don't see a lot of sunshine are just fine getting in their basking time using other sources of radiant warmth, such as braziers or lava beds. Only sunlight, however, is seen as preserving modesty, and so Vishkanya basking with fires or lava do so in strict privacy, or while clothed.

Vishkanya live about the same length of time as humans, and much like them have a definite senescence before they expire.

Vishkanya practice cremation exclusively. They feel that their remains still carry the racial root of evil from which they sprang, and the only prudent course is to destroy the body as soon after death as is respectful. Plus, Vishkanya love basking and sunbathing, and cremation is the ultimate expression of that craving for warmth.

Vishkanya cremations tend to be surprisingly upbeat affairs, as they choose to celebrate the memories their loved one has left behind, rather than mourn their unavoidable demise. After cremation, it is very common for a Vishkanya's ashes to be interred in a small stone monument and placed in a Solarium, where their spirits may return to bask as often as they wish.

This means that the Solarium in Viskanya communities are also graveyards, with the profusion of monuments and statues and obelisks containing the stone urns of the departed. Vishkanya don't consider this practice unusual at all, but private, and so this is not well known outside of Vishkanya culture.

Vishkanya get along reasonably well with most races, with the notable exception of the animal totem races. These tensions rarely go so far as to cause actual conflict, but there is bad blood aplenty, especially with the Nagdyr and Kitsune.

Vishkanya get along terrifically with the Vanx, and also do very well with Dwarves, Humans and Arborians. In all of those situations, the Vishkanya integrate into the community smoothly, and tend to find gainful employment as entertainers and owners of inns and hostels. These roles are certainly not critical to the larger community, but they definitely 'lend a hand'.

Vishkanya are not terribly pugnacious, the 'tendency to be nice' left over from their creation is anchored too deeply in their fiber, but individual Vishkanya can surprise you easily. Vishkanya are formidable when angered, even though it takes quite a lot to get on their bad side.

Vishkanya have no class or alignment restrictions.

All Vishkanya have the following Standard Racial Advantages: