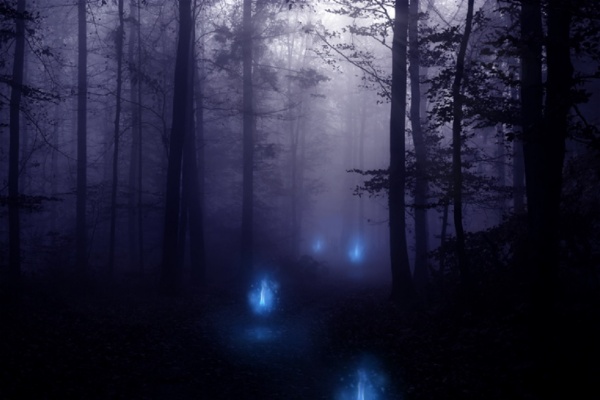 Faintly glowing lights in the middle of a dark, deadly forest.... It does not seem like simple glowing lights in the distance should be so frightening, but unless you have been lost in the woods, so very alone, and been bedeviled by a pack of Will-O-Wisp's, you have no idea the sheer terror will-o-wisp's evoke in their victims.

Will-O-Wisp's are terrible things, incorporeal fiends whose existence involves the torment and murder of innocents. They lurk in the wilds, attempting to lure the unwary to their death.

If a group of adventurers happens upon a pack of Will-O-Wisps, the encounter is rarely a conclusive one, unless the adventurers were specifically hunting the Wisps and are prepared for their odd and strange powers.

Will-o-wisps prefer to lure prey into hazardous terrain rather than confront them directly. They will try to lure travelers over cliffs, into bogs or quicksand, or into other hazards, and feed on their fear as they die. If the hazard merely injures the prey, they're more than willing to dive in and finish them off.

Because of their spell resistance and invisibility, will-o-wisps are very difficult opponents. Furthermore, if they feel over-matched, it is a simple matter for them to flee combat. Will-o-wisps are evil and ageless, and tend to hold grudges against those who manage to chase them off.

Will-o-wisps are naturally hostile, suspicious, and murderous, but that doesn't mean that other monsters don't seek them out. More clever monsters, like gnolls, bugbears, and especially hobgoblins, appreciate the merits of some will-o-wisp friends, and will seek to make alliance with these awful things. Similarly, Undead such as Vampires and even Liches recognize the merits of a few will-o-wisp minions, and they can be found in many unusual places. Wisp's tend to favor outdoors environments, but this is far from a certainty. Wisp's have been found in ruins, dungeons, other monster's lairs (either as allies, or preying on the monsters), sewers, abandoned buildings in bustling cities, and reliable reports indicate that Will-O-Wisps can be found even in other Planes of existence.

Optional Treasure Rules: Roll a d20 on Table 1 below once per encounter (NOT per creature). Any items discovered are in addition to the normal treasure for the encounter.