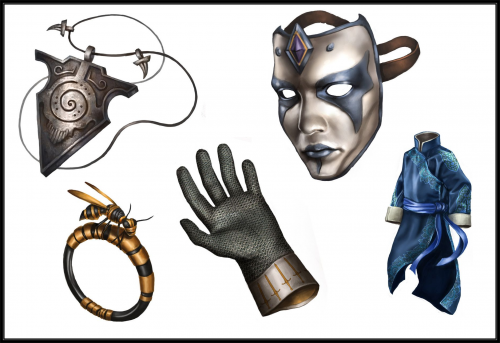 A magic item is a piece of adventuring equipment that has been enchanted to be better than a mundane version of that item. It is quite common for an adventurer to start their career without any magic items at all, because they are VERY expensive. Indeed, one powerful reason to go and slay monsters is to get their loot, turn it into money, and then buy better stuff (so you can slay monsters, get their loot, etc.).

Like all equipment and tools, magic items give your character more powers and abilities, making them more dangerous, tougher, and faster. While you don't precisely NEED magic items, the game is balanced with the assumption that you will get the proper amount of treasure, and then spend it to maintain your gear at the 'cutting edge'. If you neglect to buy better magic items, you will find that the game gets very, very difficult, quickly!

It is possible for characters to gain the Creator (Feat), allowing them to make their own magic items, usually saving quite a bit of money in the process. However, most adventurers are too busy to spend the weeks and months it takes to make their own items. As a result, most characters will buy their magic items from vendors or makers, who specialize in the creation of these wondrous wares.

Some items will not be immediately available in a given city or town. Indeed, smaller settlements rarely have a diverse stock of the many magic items adventurers may find themselves wanting. The percentage chance that a settlement has a shop containing any given magic item is listed on the Money and Merchants page.

If an item is not available, that simply means that there isn't one in town. It doesn't mean that one couldn't be made by one of the skilled creators and makers in the town, or imported from another town for the character's convenience. The character could also just go somewhere else with a better stock of magical equipment, but again, an adventurer's time is precious — they need to get back to the killin' and lootin' as soon as possible!

The time required to craft a magic item is detailed on the Creator (Feat) page, but has a base time of 2 days + 1 day per creator level (CL) of the item. Makers will always demand payment up front for an item, and the player character won't get it until it's finished, often a week or more from the day the payment is made to have it built.

Some of the more upscale vendors of magic items offer loaner equipment during this waiting period, to ensure the adventurer doesn't have to walk around completely unprotected while that new suit of armor is made. Such loaner equipment usually requires a sizable deposit, only returned when the loaner is returned in good condition.

Furthermore, you cannot take the effects or abilities of two or more items and merge them into a single item, nor can you take an item that isn't slotless and make it slotless. The idea is that each character has to make tough choices as to which cool things they want to equip at any given time. Allowing item merging or the en-slotless-ifying of items trivializes those choices. Keep your players wanting more. More. MORE!

GMs can, of course, create their own magic items, artifacts, and other MacGuffins for their campaigns, as they see fit, but they shouldn't really have a gold value. There are often occasions when the story calls for something unusual or special to fall into the players' hands, and there's nothing wrong with that. However, should the players decide to sell this MacGuffin or artifact, it is recommended that there be grave consequences for this greedy and selfish decision. For example, a bunch of low-level players who suddenly find themselves in possession of a million gold will almost certainly get mugged by the nearest party of epic-level adventurers (or the nearest evil church or cult. You can buy a LOT of goat's blood with a million gold...). Not only have they thrown away their artifact, now they have powerful new enemies! A win-win for the GM, and a solid lesson for the players.

As listed below, there are no less than twenty different 'kinds' of magic items. The first thirteen of these are 'worn' items, meaning that they are like pieces of clothing. You can only wear so many different pieces of clothing, and so it is that you can only have one magic item in each of these thirteen slots. (Except for rings, of which you can wear two. There's always an exception....) As your character advances, you should strive to have at least some sort of a useful magic item in as many slots as you can. But don't worry if you don't manage this for a while! It is perfectly valid to concentrate on a few 'good' or 'essential' items for a while, or even for your entire adventuring career. Spending a LOT of money on a few powerful items can be just as effective as keeping every single magic item slot filled with a 'decent' item.

In addition to the base slots, there are seven other types of magic items. These are: weapons, armor, rods, staves, wands, slotless items, and consumable items. Don't be fooled into thinking that these items are any less important, though! Magic weapons and slotless magical bags are among two of the very most important items the well-equipped adventurer should get first!

There are many, many versions of all these items, because most items come in 'families'. This means that there is a low-level, relatively inexpensive item that does 'something'. As you level up and grow mighty, better versions of that item that become available, usually for a LOT more money, which serves as a built-in 'upgrade path' for you to follow, if you want to.

Upgrading to a higher-quality item in the same family as an item you already possess only costs the difference between the item you have and you want to upgrade into. Normally, when you sell something back, you only get half its value from the merchant; upgrading within a family of items lets you get the full value you paid for the item applied toward the cost of the upgrade. So efficient!

The high epic items are very, very expensive. But don't worry! If you keep playing and having fun with your friends, you can eventually reach the point where even those incredible items become available to you.

Many magic items have to be worn in order to gain their effects. However, you cannot wear two magic coats and expect to gain the benefit of both coats at the same time (although you'll certainly be warm). Therefore, worn magic items are broken out into thirteen "slots". You may wear a single item at any one time in each of these slots, and enjoy the benefits of each of them, with the exception of rings. The powerful magic of enchanted rings prevents the use of a ring on every finger, but you can have one ring on each hand, to a maximum of two rings at any given time.

Wearing two items in the same slot disrupts the magic of both items, meaning you get no benefit from either until one of the items is removed. Items not worn (such as those stowed in your backpack) provide no benefit.

Listed below are all of the various magic items which you must hold in,or manipulate with, your hands to gain benefits from them. While sheathed, stowed, or otherwise not being wielded, these items provide no benefits to their owner. You will immediately notice that while you only have two hands, you have access to five types of items that you have to use your hands to use. This makes the Combat rules for switching things around in your hands quite important.

Slotless items, as the name implies, do not have to be worn or wielded in a magic item slot in order to make use of their effects. This is very powerful, since you can, theoretically, have an infinite number of slotless items and enjoy the benefits of all of them at all times (assuming their benefits are distinct enough to avoid stacking issues with the bonus types). The most common class of slotless items are containers, such as handy haversacks and portable holes.

In most cases, you'll also need a free hand to interact with the slotless magic item (such as pulling something out of your handy haversack).

The final type of magic item is consumables. These are potions, scrolls, or items with limited uses, after which they become useless or mundane objects (or perhaps crumble to dust, as their magic essence fades away). While throwing gold into items that can only be used once (or a few times) may sound wasteful, the effects available can be quite powerful, while still being quite affordable, even at low levels.

While it may seem like a Light Caduceus Rod, which allows 50 castings of Cure Light Wounds before it has to be recharged with a Small Manastone is a much more efficient use of your money than a bunch of potions of cure light wounds, those potions are affordable after your very first battle with monsters, and there's no Use Magic Device check required to drink a potion (unlike that rod). You have to buy the rod all at once, and you'll likely find its cost to be prohibitive until at least level 2, if not later.

However, a character can enjoy the benefits of multiple Enhancement Bonuses, as long as they each affect different things. For example, you can have a belt that grants you a +2 enhancement bonus to your Strength ability score, and a headband that gives you a +2 enhancement bonus to your Intelligence ability score, and these two items work perfectly fine together. If both items granted their bonus to Strength, the character would only get to use the bonus from one of the items.

Descriptions on this page do not provide all the details of the items described -- they are just summaries, and are often incomplete. Click on the item's link for complete details. In any case where the summary contradicts an item's full description, the full description should be considered correct (barring GM exception).