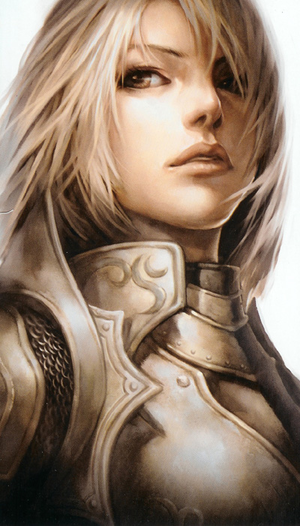 Barani look remarkably like Humans, except...more. Their skin is usually in the fairest of registers, palest tan, alabaster white, creamy ivory, or the fairest of pink, although some Barani will have skin a deep, vibrant golden tan. Their hair is rarely darker than a vibrant honey gold, and can be the palest of pink, lightest green, and the faintest of blues, in addition to pure blonde, ash blonde, and even dazzling platinum or silver. Rarely, there will be a Barani with hair of deep hue, usually blue, red, or iron-gray, although some rare Barani even have hair black as jet. Their eyes, on the other hand, can be any color, and frequently are quite dark blue, dark green, intense gold, or even deep black. This coloration tends to give Barani a very intense gaze, which can be discomforting to the meek.

Even more remarkable is the fact that Barani are ever so slightly luminescent. This is far too slight to shed useful light, but in total darkness, after the eyes adjust, a Barani can be seen to be ever-so-slightly glowing. Of course, Barani dislike darkness, and can create their own light at will, so good luck in ever observing this eerie phenomenon. Instead, a Barani's luminescence serves only to make their pale coloration even more striking. Barani look like Humans, it's true, but no Human will ever be mistaken for a Barani.

Eons ago, there was a prophecy of the End of the World. This prophecy came to pass in the fullness of days, and a vast Celestial Host entered the World to devour it in Light.

The world carried on, the various Gods, Powers, and Portents involved moved on to another vast scheme, and life went on. Except that the survivors of that vast Celestial Host were stranded in the world, their destiny thwarted. Thousands of them perished of despair, hubris, and simple attrition. But thousands more of them settled down, adapted to their new home, and slowly, over ages of time, these exalted destroyers came to resemble the races of the Prime Material more and more, until they became the eerie race known as the Barani.

Barani today are a humanoid race like many others, except they still carry that spark of the Scourging Light which defined their race from the very beginning. Barani today are neither good nor evil, any more than any other race, and their gifts of light are often tinged with destruction, as they are still fated, some day, to end the world.

Barani live as any other humanoids, marrying and having children, trading with their neighbors and existing in the world. But every moment of every day, all Barani feel the weight of their destiny, whether they want to fulfill it or not. This eroding pressure of doom pervades Barani culture, and even though they are bright creatures of the light, there is a melancholy which hangs over their communities like a pall.

Barani children are born bearing their lifetime allocation of The Spark. Births are a time of celebration, but as always in Barani culture, that happiness is tinged with melancholy as every successful birth robs the parents of a portion of their Spark, shortening their lives by a noticeable amount. Due to this, Barani families rarely have more than four children.

Barani live in loose enclaves, several or many Barani families in loose clusters, often mixed in with other humanoid races. Barani tend to follow the customs of their adoptive culture, with the notable exception that all Barani, everywhere, celebrate the Summer Solstice as a holiday they call the Day of Light, where gifts are exchanged and prayers are offered that the coming year will be better than the one just passed.

Barani children are extremely active, walking at three months and talking at the age of 1 year. Barani similarly mature to adulthood very quickly, reaching full adulthood by the age of ten, and they live long lives, with a distinct middle age period that begins at age forty. They do not suffer from a period of dotage, and instead die at the same age as humans do. However, a Barani's maximum age is decreased by ten years for every child they have successfully sired or birthed.

Barani are a very 'average' race in terms of their economic impact. Barani are skilled diplomats and craftsmen, and their racial abilities tend toward the martial. Many Barani become healers and warriors, and as a result, their greatest economic impact is the money they make as adventurers and the fact that they often serve in military units or the Town Watch.

Barani tend to be quite fearless and have potent abilities against Undead. It should come as no surprise that the race with the celestial Spark contains many priests and clerics. Barani who serve as representatives of clergy make the largest contributions to the economy of the world. Barani frequently live in or administer large temples, cathedrals, and monasteries, and as such, their impact on their neighbors can be quite considerable.

Barani tend to observe the customs and traditions of the larger cultures around them, with the notable addition of their own holiday, the Day of Light. Barani feel the faint pressure of their destiny at all times, and this vague sense that they should be destroying everything they see can lend them a palpable air of melancholy. It is hard to get excited about things when having a family shortens your life and everything you gain just makes you want to break it.

That said, many Barani work very hard to abrogate their destiny and draw joy from the world around them, the world that has taken them in as natives even though they wish for its destruction. Other Barani seek to fulfill their destiny, and as a result, break and burn and kill with a sense of grim duty.

Regardless of their feelings, Barani strive to gift their light to everyone they meet. The Day of Light celebration demands that Barani bring light to all they meet.

Barani live as long as humans do, but their childhood is short and they do not suffer from a dotage period. As a result, Barani effectively have more years of life than their lifespan would indicate.

As for burial customs, Barani will observe the customs of the cultures they live among, but only in a perfunctory manner. Barani know that the thing that matters is The Spark, and a Barani who has died of old age no longer has any Spark, and indeed, their bodies no longer have the ability to support a Spark at all.

Barani are generally well liked by their neighbors, and this level of regard increases as the number of undead in the area increases. Barani make excellent diplomats, judges, and watchmen, as well as being superb clergy.

That said, Barani can be a bit of a downer. The racial melancholy which dogs them is reflected in their demeanor and speech if they are not carefully on their guard against it. As a result, Barani have a reputation as being as grim-faced and lugubrious as any race out there, even though their powers are rooted in Light.

Since Barani have a fairly short childhood, they also tend to be seen as a bit boring and prosaic in the eyes of the same-aged youth of neighboring races. Who wants to hang out with an adult? These prejudices, however undeserved, sometimes linger in communities with many Barani.

Barani have no class or alignment restrictions.

All Barani have the following Standard Racial Advantages: