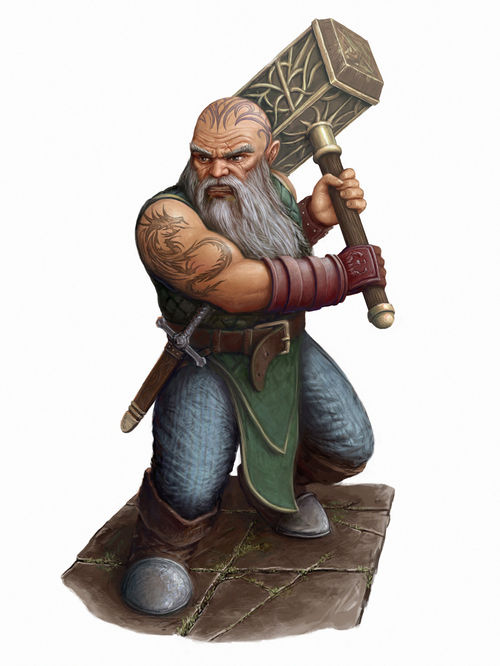 Many races claim to be from 'somewhere else' in the distant depths of their ancestral memory. Not Dwarves. Dwarves are just about as 'Prime Material' as it's possible to get. Dwarves love the Prime Material, in as materialistic a form as they can. Dwarves will happily live and work their entire lives deep under ground, burrowed snug and warm against the bosom of the Prime Material. Dwarves can look at stone and they don't just see a rock, they see the story of that stone, the stresses and strains, the tension of its existence, the gigantic strength of the Earth within it. Dwarves like stone, they find it warm and fascinating, endlessly full of stories and richness.

Dwarves arose from stone, long ago. Dwarves may be the oldest race of all, but if they are, they spent untold ages deep within their beloved stone before the first Dwarf swung a pick and found out that the stone...stopped.

Dwarven legends speak of a great turmoil in their deep cities to discover there was an End to the Stone, a Great Void where many other strange races lived (what those races call 'above ground'). The Void was a place of mysteries and terrors, vast and echoing emptiness, and above it all the great untouchable vault of the sky and all the myriad of things within it.

Whether Dwarves were made by a deity, arose from the Stone spontaneously, or were simply always there from the very beginning nobody knows for certain. There are many Dwarven Deities who claim conflicting versions of the tale, and who knows, since they are Gods, maybe ALL the stories are true or none of them.

There are a LOT of dwarves. The Earth is deep, and there are persistent rumors of deep enclaves of Dwarves who still have not reached the Void, and know nothing of it. Even the known Dwarven nations beneath the earth are large indeed. On top of that, the Dwarves have colonized the Void in great numbers, such that entire mountain ranges (how strange, stone ABOVE stone) are Dwarven nations. Dwarves have come to value Void goods such as timber (much better than mushrooms) and crops (MUCH better than mushrooms.)

Dwarves tend to have large families with the children widely spaced apart in years, and will generally keep having children for the entire time they remain together. Dwarven women remain fertile their entire lives, and have been recorded to bear children even at the age of two-hundred and fifty years. Large families are very common, and Dwarves feel no pressure about living space: When you can simply dig out a new tunnel a few miles and open up an entire new vista of living space, you can see why.

Dwarves are dour folk by nature, the sort of people who find staring at a rock to be hugely entertaining. Other races don't get the point. Dwarves are famously fond of beer and brandy, and honestly, when most of your food is various types of rock-loving fungi, you'd brew as much of it into beer as you could too.

Dwarves do not need a lot of living space either, and have little sense of personal space or a desire for privacy. Dwarves at home tend to pack in tight and enjoy it that way.

Dwarves really do love precious metals. To a Dwarf's sight, gold, silver, platinum, copper, gems, and all such things are far more enjoyable to look at than they are to other races, because a Dwarf is simply seeing more in the material than other races can. Dwarves want more of these beautiful and fascinating materials to look at, and they love displaying them, working with them, touching them, wearing them and everything else about them.

As a result of their strong attunement with the Earth, Dwarfs tend toward earth-tone in their coloration. Dwarven hair is usually some variant of rich, earthy brown, ranging from sturdy red-brown to near slate grey, although black is also sometimes seen. Some few dwarfs will have golden or silver hair, and such are considered either very attractive or overly gaudy, depending on how surly the beholder is feeling. Similarly, skintone is usually some shade of brown, ranging from the rich hue of well-tanned cream leather to the serviceable chocolate tone of fertile bottomland. Occasionally skin of stony grey will be seen, and oddly enough, freckles are common in Dwarfs. Eyes are often black or brown, with a notable percentage of eyes the color of precious stones, such as malachite green, amber, rich purple, brilliant red, and most striking of all, reflective eyes of refractive hue like diamonds. Dwarven men very often carry a mighty beard, and the beard is often a different color than the hair on their head, although it follows the same trends in color.

Dwarves have children much like humans do, and Dwarven women need care before and after pregnancy much like humans as well. As a result, Dwarves like sturdy, comfortable, very permanent homes that they then fill to the brim with life and activity and children. Young dwarves are allowed to run and play until they reach the age of five, and then they begin to learn the rules.

When you live underground, there are a lot of rules, and they are all important. Breaking the rules can get you and other dwarves killed, so all dwarves have a real love of rules. That said, some dwarves love knowing all the rules simply so they can break them more efficiently, but the core love of rules is the same.

Dwarves go to school from the age of five until fifteen, where they learn reams of lore and history, the lore of stone, the joy of hard work and the beauty of treasure. From the age of fifteen to adulthood, they become apprentices in one of the millions of Dwarven Guilds. After 25 to 60 years as an apprentice they become Journeymen, which is when most adventurous Dwarves make the decision to strike out into the world.

Dwarves are rich in living space and in food. They do not count treasure as riches. To a Dwarf, precious metals and gems are the very best of the stuff of Stone, and they will rarely, if ever, part with any significant amount permanently. That said, Dwarves live a long time, and they will cheerfully spend treasure today, but they always plan, always, to make it all back in the next century or two. Dwarves will trade and sell foodstuffs, dimension stone, and less precious metals like iron and tin without hesitation and in great amounts, but they will never sell off gold or silver or gems.

Dwarves love guilds, and associations, and covens and circles and councils and every other form of structure. Structures in society neatly parallel the structure required to convert simple Stone into a teeming underground city, and Dwarves love that stuff. Again, some Dwarves love structure simply because it gives them something to overthrow and rebel against, but the underlying love is there.

Dwarves tend to have very stable and very large extended families, with many siblings, dozens of cousins and uncles and aunts and every other sort of relation. Dwarves do not marry early, but they marry for life, so they try to make sure their spouse is someone they can at least tolerate for a century or two.

Dwarves live between two hundred and three hundred years, and they have a definite childhood, adulthood, seniority, and dotage. Dwarves who have settled down REALLY settle down, and often will build themselves huge and elaborate crypts and cenotaphs inside their massively fortified holdfasts and citadels.

Dwarves are not terribly friendly sorts even with each other, at least on time scales many races can grasp. It often takes Dwarves a decade to learn each others names, never mind form a friendship. Dwarves, with their stone sight, are also fairly alien compared to many of the races in the Void, and enjoy things that other races just can't. For example, a favorite Dwarven pastime is polishing gold, so they can watch the endlessly fascinating way the stone currents move and reform under their touch. Other races cannot see these things, and interpret Dwarven behavior as simple greed, which is not the case at all.

Dwarves have no class or alignment restrictions.

All Dwarves have the following Standard Racial Advantages: