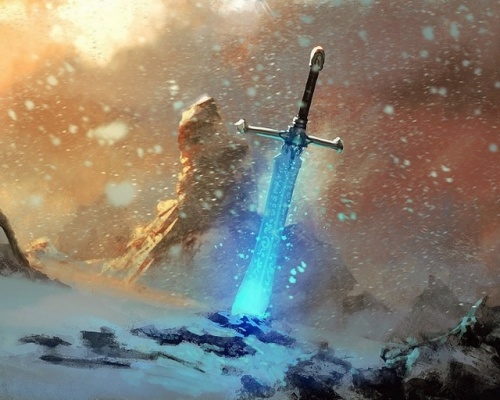 A huge variety of magic weapons are possible, and most of them are either available for purchase at a magic item shop, or can be custom-made with enough time and a good craftsman. Characters with Creator (Feat) can even make such weapons themselves, if they are so inclined.

To determine the cost of a magic weapon, you must add up the following:

As can be seen, the variety of weapons that can be built is very, very large, and players are encouraged to explore the vast range of possibilities. Have fun! Try new things!

A magic weapon is enhanced to strike more accurately and deliver more damage. Magic weapons have three types of improvements that may be applied to them:

Enhancement bonuses are usually listed as part of the weapon's name, such as "+2 longsword".

Any attempt to wield an epic weapon prior to 21st level results in the character taking a non-proficiency penalty with the weapon (-4 to attack rolls), and the possibility of even more dire consequences (such as insanity, or being controlled by the weapon).

At level 36 and higher (apotheosis) all limits on enhancement bonuses and the magic properties are lifted. Apotheotic weapons can be enchanted in any way the character can afford.

Magic properties are additional traits, bonuses or effects the weapon grants or performs on top of the normal functionality of that weapon. Magic properties each have a cost associated with them that is measured in pluses similar to the weapon's enhancement bonus. The cost of a magic weapon's properties is determined by adding the pluses listed for each magic property and looking up the price on the table above.

Enhancement bonuses cannot be removed from a magic weapon once applied, but the enhancement bonus can be increased. The cost to do so is the difference in cost between the old bonus and the new one.

Magic weapon properties can be removed from a magic weapon, replaced with altogether new properties, or upgraded to a higher version of the existing magic weapon property (when applicable). The cost to do so is the difference in cost between the total pluses worth of properties on the old weapon and the total pluses of properties being applied to the new weapon. However, if the total plus-value of the weapon goes down, there is no refund of money unless you can convince the craftsman performing the alterations why they should actually pay you for the privilege of doing that work. Performing magic property swaps and upgrades takes one full day of work per change in the plus-cost of the weapon, with a minimum of 1 full day. Even if this work isn't performed by a player-character, the character must wait for the alterations to be performed, and they cannot make use of the weapon while the craftsman is working on it. Some craftsmen might offer to lend or rent out a weapon while their customers wait, though they would expect the loaner weapon to be returned to them in good condition.

A magic weapon that is upgraded with epic properties before its wielder is at least level 21 will inflict a non-proficiency penalty on the wielder, or worse.

Dweomermetals can be added to a weapon at the time it is purchased (or created), increasing the price depending on the dweomermetal chosen, and the handiness of weapon it is applied to (light weapons, one-handed weapons, and two-handed weapons). Note that ranged weapons, such as bows, also have a handiness (bows require two hands to fire), and use the same prices.

Note that special materials cannot be normally be added to an existing weapon, though some advanced armor smithies offer a reforging process that makes this possible.

Only ONE special material may be used in the construction of a single weapon, even after the Apotheosis at level 36. A weapon cannot be made of both ambergold and paramount alloy. The Double weapons, such as the 2-bladed sword, are the exception to this rule, as each end can be made of a different dweomermetal, if desired.

The creation level required to craft a weapon is calculated as follows:

A character wishing to craft the weapon must have Creator (Feat), and a minimum character level equal to, or greater than, the weapon's creation level.

There is no magical ammunition. While melee and ranged weapons can be enchanted with enhancement bonuses, magic properties, and dweomermetals, ammunition (which always has the expendable weapon quality) cannot typically be enchanted or made of special materials. Instead, ammunition always inherits the enchantment (the enhancement bonuses, magic properties, and dweomermetal benefits) of the weapon from which they are fired.

Weapons designed for throwing, such as the throwing axe or the careen (but not ammunition), may gain the Returning property for only 50 gold if the player desires it.

These Returning properties cost very little, they do not alter the cost of additional magic properties, and they do not count against the maximum possible enchantments the weapon can have.

Some magic weapon properties cause the weapons to always or never glow, as defined in their descriptions, and this cannot by changed by the player's desire at item creation.

Characters cannot initiate a stealth stance if they are carrying a visible source of light. In addition, a stealth stance is immediately broken if the stealthed character reveals a light source. If the magic weapon generates light, it can be left sheathed in order to mask its light, permitting stealth, but as soon as such a weapon is drawn, any ongoing stealth ends.

Weapons do not have hardness or hit points. A weapon can be Broken if a sunder attempt successfully equals or exceeds the wielder's Maneuver Defense. Most weapons (and indeed, most items of any type) have a Durability of one, so a single Sunder Breaks them. If a weapon or other item has a Durability greater than one for whatever reasons, it is unaffected by successful Sunders until its Durability reaches zero, when it gains the Broken condition as normal.

Magical enhancement bonuses on weapons do not increase the wielder's Maneuver Defense versus sunder attempts, though some Dweomermetals do.

If a weapon has a weapon property that the user needs to activate, then the user usually needs to utter a command word (a standard action). Refer to the magic property description for details.

Some magic properties and some specific weapons have an extra effect on a critical hit. This special effect overcomes immunity to critical hits. Critical hits rolled with these weapons function against creatures not normally subject to critical hits, but only for the weapon property's effect. In such instances, on a successful critical roll, apply the magic weapon's special effect, but otherwise resolve damage as though it were a normal hit.

The cost of weapons for creatures who are neither Small nor Medium varies (see Equipment). The cost to enchant a size large weapon is unchanged, however, nor does the weapon's size increase the time required for enchantment.