Difference between revisions of "Clockwork Agent" 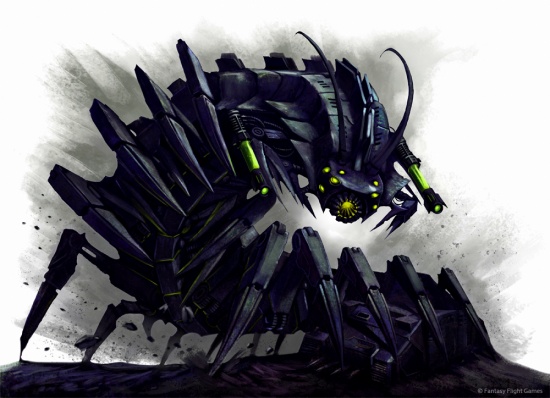 Clockwork Agents are tiny iron constructs about five inches long, small enough to sit in a human's palm, which look like scorpions crossed with centipedes with a single large eye on their heads. They are created via a complex combination of clockwork and alchemy. They are unintelligent, relying on an analog program encoded in their clockwork to determine how they respond to stimuli. Clockwork agents have excellent visual sensors which, with a properly attuned scrying device, allow their creator to peer through their eyes. As a result, clockwork agents are primarily used to keep watch over large areas, such as a castle, dungeon or lair.

Clockwork agents are capable of digesting unattended objects, converting the digested material to iron, and extruding it into nearly any shape or size, given enough time and raw resources. Therefore, in addition to being useful spies, they are also very useful at creating and maintaining large iron structures, such as gates, walls or even whole buildings. Since they are, themselves, made of iron, they can also self-replicate, though the programming for this is usually highly restrictive to prevent an unwanted outbreak of Agent swarms.

If left undisturbed, nearly all agents are programmed to ignore passers-by or other organic life moving in their presence. However, attempts to interrupt their work or move them from their current space will usually trigger their defensive programming. Since they perform their surveillance duties best when distributed widely over a broad area, it takes one or more rounds of harassing a lone Clockwork Agent before the swarm will converge and attack the aggressor.

While clockwork agents are excellent visual observers, they also have a limited form of telepathy, allowing them to communicate with other Clockwork constructs, but nothing else. Alchemists have tried for centuries to improve it to allow direct communication with the Agents, but all such attempts have failed. All studies of the clockwork construction and alchemical agents used indicate that the telepathy shouldn't exist at all.

As a move action, the Clockwork Agent swarm may attempt to disassemble a creature's weapon, armor or shield. The Clockwork Agent swarm must be in the same square as the target, and the weapon, armor or shield must be made of metal. The clockwork agent resolves this attack as a Sunder maneuver (1d20 + 8 vs. target's Maneuver Defense). This attack does not provoke attacks of opportunity. If successful, the item takes 1 point of siege damage, reducing its durability by 1. Objects which have their durability reduced to 0 become Broken. Disassembler has no effect on an object which already has the Broken condition.

Any living creature that takes damage from a creature with the distraction ability must make a Fortitude save, DC 16, or become Afflicted. If the creature makes the save, they are instead Sickened. If they take damage on any following round while still Sickened or Afflicted, they must make another DC 16 fortitude save, or move up one on the Status Array. While sharing a space with the swarm, you cannot get rid of the Sickened condition. At the end of any round in which you are outside of the swarm, you may make another DC 16 fortitude save to attempt to move down a step on the status array. (While outside of the swarm's space, you cannot go up on the status array if you fail the save, you simply remain at the status you currently have.)

In addition, spellcasting or concentrating on spells within the area of a swarm requires a Caster Check against the swarm's Maneuver Defense (DC 20). Using skills that involve patience and concentration requires a DC 16 Will save.

Clockwork Agent swarms are harmless unless harassed or unless someone triggers their defensive programming. While they are competent defenders, they are not usually used to defend an area they were designed to observe. The sort of person capable of creating an Agent swarm is nearly always capable of creating constructs more specifically tailored for violence.

Some fairly common triggers that would cause Agents to act aggressively might be:

When triggered to aggression, the Agent swarm will swarm the hostile creature, attack it once with its cutters, and thereafter attempt to use its disassembly ability. The Agent swarm will keep using disassembly until either the creature's weapon becomes broken (it won't bother to destroy it), or until the first time the swarm fails to overcome the target's Maneuver Defense. After that, it will simply attack the creature with its cutters until its target dies or the swarm is dispersed.

Clockwork agents operate on the orders of their creator (presumably), but often their orders are difficult to surmise. They are often motionless observers of an area, but in other cases, they can be seen to devour any source of iron, or alloys containing iron, from raw ore to tempered steel. Once they have consumed an appropriate amount, they create a new clockwork agent from the harvested iron.

Clockwork agents are also capable of creating nearly any structure out of iron, if they are ordered to do so. To accomplish this, they will harvest iron into the form of additional agents, move to the site of their intended construction, then harvest their fellow swarm members to extrude the new work. This process is uncannily precise, and is capable of creating fine lattices and wire, and even structures inside other structures, which would be nearly impossible for a smithy to recreate.

Sometimes their programming becomes corrupted over the many iterations of their replication, which can lead to very peculiar behavior. In one reported case, a swarm of clockwork agents systematically replaced an entire town of its original materials, and replaced everything with an iron replica (even the food in the larders!). This process took quite a while, but the villagers who lived there were not willing to interfere, and were ultimately forced to move away. This iron village has long since fallen to rust, but was a highly unusual monument while it stood.

It is unclear who originally created the Clockwork Agents, and other constructs of their ilk, nor who continues to control them, if anyone. The process to create them has never leaked into the public, so if anyone alive is still capable of doing so, they aren't talking about it.

Optional Treasure Rules: Roll on the following table once per encounter (NOT per creature). Any items discovered are in addition to the normal treasure for the encounter.