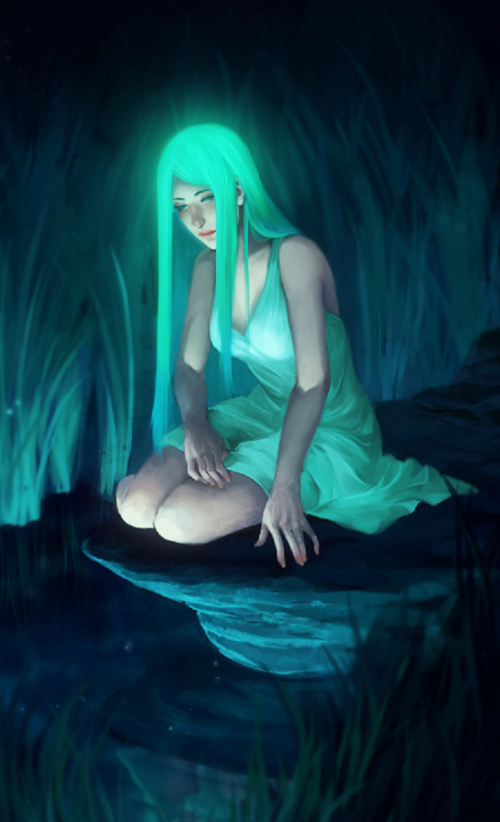 Ages ago, Undines were created when spirits of water merged with the creatures of the land. Some say that Undines arose as a response to other spirits doing the same thing, and others say that Undines were the first of the spirit races, and all others followed along behind. The truth is lost to time, as it is with so many others.

Regardless of when or why, the Undines have been in the world for ages. They did not arise in the Dawn Times, but soon thereafter, and they are deeply meshed into the lore and mythology of the world. Undines are quite rare, and have little urge to expand their numbers. Undines tend toward philosophical thought and simple, earthy pastimes, and have many users of magic among their number, which is a bit odd since their physical prowess in battle is literally second to none.

Undines are of Water, but they are not Aquatic. They live on the land and have to breathe air, although they eat no food. Instead, Undines eat water and gain all their sustenance from it. They particularly love ice, and consider snow a treat. Undines find dozens of flavors and varieties in ice and water, and delight in brackish swamp water, clear spring water, black bog water, and a myriad of others.

Undines are handsome beings, although their physical bodies are not nearly as settled in their shape as most races. Undines tend to be just slightly translucent, and in extremely bright light you can see into their flesh up to several inches, as though peering into water. They have a range of colors to their flesh, centered around a myriad shades of pale green, pale blue, ivory, and even violet. They tend to have straight hair, which hangs as though wet at all times, straight from their heads like a cascade. Their hair tends to be pale in all the colors of their skin, or rarely, deep, dark colors, deep blue or green or even the darkest of black, like a spill of ink. Their eyes are prosaic, and usually blue, green, or white.

Racially, Undine are remarkably durable, their uncertain forms able to bend and deform to absorb blows and allow magic to pass through them, doing little harm. Undines are very difficult to harm, which contributes to their generally peaceable demeanor: the average Undine would rather avoid a fight than 'duke it out.'

Undines are an inconstant race, fluid and mobile. This same tendency is found in their society. Undines are not likely to marry or formally tie themselves to a mate. Instead, Undines find one another, love intensely, and then wander on. As a result, the traditional 'family structure' means little in Undine society. Reinforcing this is the uniquely Undine manner of birthing children. If an Undine woman finds that a child has quickened within her uncertain flesh, she will carry that child as an uncertain whorl of potential for several months. During this time the mother is not inconvenienced by the child in any way. After a time, she will find a small pool, or an eddy, or even a modestly stable stream, and she will quicken the whorl of potential into the water and leave, her duty complete.

The infant Undine will live in the spot chosen by the mother for a month or two, solely as a whirling disturbance in the water, and will then emerge as a fully grown Undine. Such Undines are 'born' with a mixture of the memories of both their mother and father, and usually will set out in search of their parents. Undines are thus born fully grown, and with a store of knowledge and experience they can use to enrich their lves.

Undines usually live on barges or ships, on rivers, lakes and oceans. As a result, they have a tight-bound shipboard 'family' which will tend to take in any young Undines who are created nearby. There is no indication who has sired who, and so all Undines are treated the same...in theory. Undines tend to have big, loose-knit circles of friends and acquaintances, and the friendship of an Undine is a gift readily gained but difficult to keep. Undines have discerning taste, and if a person treats them poorly such a slight will be remembered forever. That said, Undines have a severe case of wanderlust, and tend to be semi-nomadic at a minimum. Many Undines become sailors, and some Undines are said to wander the Earth ceaselessly, fated to never stand still.

Undines do not really have a childhood, but that does not stop them from having childhood memories. These are formed from an amalgam of racial memories from their parents. Undines are born with a basic education, often knowledge of a simple trade, and if there is an Undine settlement nearby, they will even have 'friends' based upon the likes of their parents. Undines typically find the nearest Undine settlement and just move right in, set up shop, and seamlessly blend in. Undines do not go to school, either, being 'born' with a solid grasp of the world and its workings.

If an Undine is not close by to an Undine settlement at 'birth', they will settle in with the local population and simply 'go with the flow'. Given how many Undines wind up in a nomadic lifestyle, this is considerably more common than one might assume.

Undines are affiliated with water, but they are not aquatic. This means they can live in any environment with no ill or positive effects, although an undine in the desert is greatly admired for their drench ability. Indeed, in arid climes, undines are tremendously sought after, to the point that they are at risk of enslavement in less scrupulous societies. In the larger world, undines have relatively minor impact on most economies, as they have no major racial abilities which impact an economic system. That said, undines are amazing sailors, and many, many undines are nomadic, living on great ships plying the waves. Indeed, it can be said that anywhere there are undines, a large portion of all ships crews will be undines, and no matter how common or rare undines are in most lands, there are always undines at any major port.

Undines thus tend to gravitate over time to wealth, as they work on ships crews and work their way up to captaincy.

It must be mentioned that there is an unfortunate trend for undines to also gravitate toward piracy, as their fluid world-view makes them quite accepting of lawless professions. Even the most upstanding and well-loved undine captain is likely to have a writ of marquee and indulge in a little sanctioned privateering when the opportunity presents itself.

Undines also tend to be well-traveled and well-connected, so that they are often encountered as contacts, fixers, and arrangers, even far from the sea.

Undines are very loosely knit, as a society. They venerate the oceans, rivers and all still, deep waters. As a matter of fact, they have a nigh-religious attachment to still, deep water, and admire it in all cases. Undines prefer clear waters and still waters, and are less interested in murky water and flowing water. A muddy river or a busy, murky harbor is unlikely to draw an undines interest, while a high alpine lake, surrounded in silence and achingly clear all the way to the bottom, is very likely to have an undine or two living on the shore no matter how far it is from the sea. Undines greatly prefer to live on the shores of a lake or the ocean, and are very rarely found where the water is murky, such as swamps.

Aside from these quirks, undines tend to take on the cultural aspects of a host culture nearby, usually but not always a human one.

Undines live to the same age as humans, and age at the same rate. They suffer from the debilities of age the same as humans, as well. Since they do not need years to develop as children, their young adult phase is effectively from the age of birth, although it is common for an undine to settle into life and work on a career for a decade or more before they set out on an adventuring lifestyle.

At the end of their lives, undines age and expire as most races do, but when they die of old age, their bodies liquefy into water over the course of several minutes, evaporate, and vanish utterly. To other undines, watching this process is profoundly impactful, being both exalting and disturbing all at once. As a result, when an undine is in poor health and the end is certain to be near, they will tend to form up and have a wake, in lieu of a funeral, with the dying undine participating as cheerfully as possible. Having no body and no real inclinations to set down roots, undines do not practice any real burial customs. Family members and friends may wear a token of remembrance for a time, but undines flow away after death as readily as they flowed in life, and they are soon gone.

Undines are not a pugnacious race, indeed, they are very easygoing. Given how tough they are in a fight, this is probably a good thing for the other races. As a result of their easygoing nature and the fact that they're really tough, few races have any quarrel with undines, aside from the Nagdyr who are difficult with anyone, and the Ifrit, whose fiery nature finds it hard to stand being around an undine for any great length of time.

Undines have no class or alignment restrictions.

All Undines have the following Standard Racial Advantages: