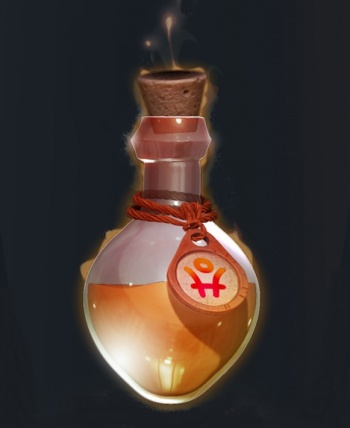 Magic potions are liquid-based magical solutions that are normally imbibed to gain the effect upon yourself, but in some cases are poured onto a weapon, or even a patch of ground. In no cases are potions thrown, nor can they ever effect more than one target, even if the spell effect that the potion is enchanted with would normally affect multiple targets. Potions may only be given to willing (or helpless) targets if they are used on someone other than yourself.

Drinking (or using) a potion never requires a Use Magic Device check. Potions will work for anyone who drinks (or uses) them, even if they have spell resistance! Furthermore, arcane spell failure chance, either from armor or a shield, has no effect on potions, since gaining the benefits of a spell from a potion does not require you to use any somatic components.

While you must, technically, have a hand free to draw a potion and pour it into your mouth, a number of weapons and wielded objects leave enough room in your hand to also hold a potion. This includes all light weapons, light shields, bucklers, rods, and wands. Two-handed weapons can be held in one hand while the other releases the weapon (a free action) to draw the potion. As a result, in most cases, the GM and players don't really need to worry about the 'need a hand free' requirement, unless the character attempting to draw the potion is obviously unable to let go of anything they're currently wielding or carrying with either of their hands.

For those interested in drinking potions often, the Quick Draw feat, the Quaff feat, and the Sipping Jacket all help make the act of drawing and drinking a potion much easier.

Note that some potions, such as Feather Fall, are only an Immediate Action to cast, but are still a standard action to drink as a potion. This significantly diminishes the usefulness of these potions unless you have some means of drinking potions more quickly.

Potions are stored in crystal vials, and are usually about 3 ounces of liquid, making them easy to consume quickly, even if you aren't particularly thirsty. Of course, potions rarely taste good, and some have been known to taste like impossible things, such as 'the color red', or 'a very itchy rash'. Magic is funny that way, and drinking magic isn't for the faint of heart.

The crystal vials are unusual in that they are quite durable. They will not break if dropped, or even if thrown. They can, however, be Sundered, even without a weapon that has the Sunder quality (since they are not made of, or reinforced with, metal or stone). Any sunder damage or siege damage that would deal 1 point of durability damage to a potion will smash the vial and destroy both it and its contents. Potion vials destroyed in this way cannot be repaired, even with Greater Make Whole or similar magic. They are destroyed and not recoverable. Best protect your potions.

Only spell effects as high as spell level 4 can be made into potions, and even then, only a few spells are available in potion form. The table below contains a list of every potion that has ever been successfully crafted by a skilled creator. (GMs may allow spells other than those on this list to be made into potions on a case-by-case basis, but probably shouldn't. If a spell isn't on this list, there's a reason for it. Most often, it is because the spell effect requires a non-willing target, but in some cases, such as Mage Armor, the spell was left off this list because it is an ability reserved only for those who practice that type of magic and cannot be shared out to the rabble in a simple drinkable form.)

Potions do not use the character or caster level of the drinker, nor the drinker's ability scores, feats, skills, and other class features. Only the creator level of the potion itself matters, with regards to how powerful the spell effect being conferred actually is.

If you wish to purchase a potion with a higher creator level, you can refer to the table below to find the cost:

If a character has the Creator (Feat), they can attempt to make their own magic potions, and the potion can be any creator level up to the character level of the creator.

The creator does not need to be able to cast the spell that the potion will be able to confer to its imbiber, though it certainly simplifies matters if they can. If they cannot, they must find a remnant of a tier sufficient for the creator level they are attempting (see table below), and they must find some object that is symbolic of the spell they are attempting to imbue into the potion. If the creator can cast the spell themselves, they do not need a remnant or a symbolic item. (See? Much simpler!) In such a case, the creator does not suffer the normal penalties for having no remnant or symbolic item.

The cost to create the potion is half the gold piece value of the potion if it were bought in a store (see table above), minus the cost of the symbolic item (if any).

Special: If they wish, a creator may attempt to brew multiple batches of a given potion at the same time. To do so, they increase the target DC of their Bailiwick skill check by +5 per additional potion being attempted. There is no maximum to this, though the creator must declare it before they make their Bailiwick skill check. The cost to create the batch of potions increases such that it is half the total retail cost of all potions being attempted.

Other than the time required to create a potion, crafting a magic potion follows the normal rules described in the Creator (Feat) page, and on the Craft Magic Item skill use for your Bailiwick skill.