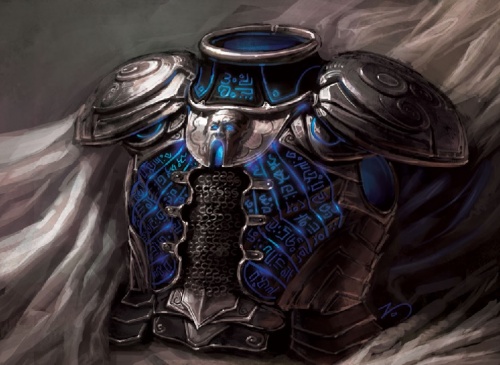 Magic armor properties grant the wearer special abilities while wearing the armor. These abilities vary greatly, but often bear a resemblance to spell effects. Note that Spell Effects cannot be applied to armor.

Those magic armor properties which provide a permanent bonus must be worn for 24 hours in order to attune to the item and get its benefits. Once attuned, the item provides the bonus any time the magic item is worn. When taken off, the magic item does not provide any bonuses but the attunement stays intact (if there are exceptions to this rule, the magic armor property will specifically state that the effect continues even if the armor is taken off). An attunement is lost if someone else wears the item for 24 hours and becomes attuned, at which point the previous attunement is disrupted. The original character can, of course, re-attune to the item with a new 24-hour attunement.

Important Note: If a character has more than one item equipped which provides magic armor properties, only the item with the highest enhancement bonus actually provides benefits to the wearer (in the event they are the same, the wearer may choose which item functions and which is dormant). The lesser item's magic armor properties provide no benefits whatsoever, even if they are 'always on' abilities, unless the greater item is taken off.

To determine the cost of a suit of armor, three elements must be added together:

Dweomermetals do not alter the enhancement bonus costs, or the magic properties cost of armor, though the cost for the dweomermetal is added to the overall cost of the armor.

Note that special materials can be added to an existing suit of armor, or an existing dweomermetal can be removed entirely, or removed and replaced with a different dweomermetal. See the reforging rules for details.

Epic tier characters (characters level 21 to level 35) can wear armor with an enhancement bonus up to +9, and can have a total of up to +9 pluses-worth of Magic Armor properties applied to their armor.

Any attempt to wear armor more magically enchanted than your level allows results in the character taking a non-proficiency penalty with the armor (-4 to attack rolls), and the possibility of even more dire consequences (such as insanity, or being controlled by the armor).

At level 36 and higher (apotheosis) all restrictions on enhancement bonuses and the magic item properties are lifted, at which point the armor may be enchanted in any way the characters can afford.

Magic armor properties can be removed from a suit of magic armor, replaced with altogether new properties, or upgraded to a higher version of the existing magic armor property (when applicable). The cost to do so is the difference between the cost of the sum of plusses of the old properties and cost for the sum of plusses of the new properties. However, if the sum of plusses of the properties goes down, there is no refund of money unless you can convince the craftsman performing the alterations why he should actually pay you for the privilege of doing that work. Performing magic armor property swaps and upgrades takes one full day of work per change in the plus sum, with a minimum of 1 full day. Even if this work isn't performed by a player, the player must wait for the alterations to be performed, and they cannot make use of the armor while the craftsman is working on it. Some craftsmen might offer to lend or rent out a suit of armor while their customers wait, though they would expect the loaner armor to return to them in good condition.

Magic Armor which is altered in such a way as to violate the limitations of the campaign level will inflict a non-proficiency penalty on the wearer, or worse.